Deep Impact Sold to the U.S.A. 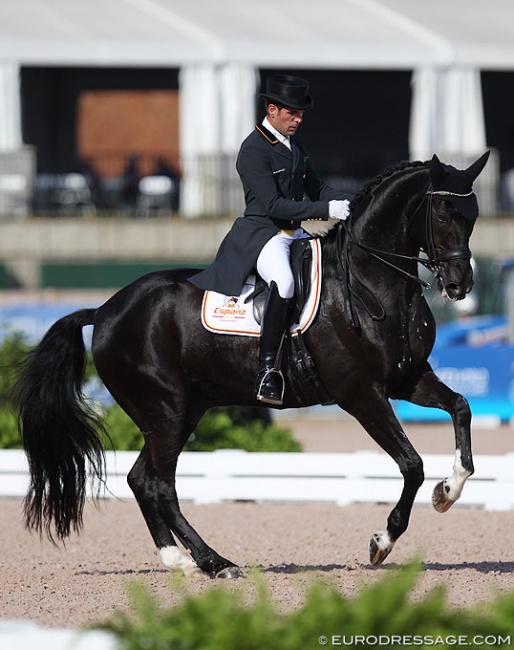 Deep Impact is a 15-year old Hanoverian gelding He is by De Niro out of Rubina (by Rubinstein x Gutenberg x Akzent I). He is bred by Bernhard Menke and owned by Helgstrand Dressage.

Andreas Helgstrand purchased Deep Impact in Hungary from Robert Acs and Aniko Losonczy.  in February 2016 as a 40th surprize birthday present for his wife Marianne.

Deep Impact originally came from Fiona Bigwood and Anders Dahl's stable before he moved to Acs. The black gelding made its show debut late in life at age 10 under Acs. He won a national Prix St George Special at the CDN Neu Anspach in September 2013 and then it took almost two years to return to the ring again at the same event in July 2015 where he finished 8th in the Intermediaire II. With Acs he did one international show, the 2015 CDI Fot.

Marianne Helgstrand never competed Deep Impact, but instead Severo Jurado Lopez took on the ride. They made their show debut at national level in Denmark in January 2017. Three months later in March the pair made its CDI Debut. The Spaniard and Deep Impact represented Spain at the 2017 European Championships in Gothenburg (12th in the Kur) and at the 2018 World Equestrian Games (18th in the Special).

Severo took to Facebook about his ride selling to America. "Goodbye Deep," he said. "Thanks for all the great hours together and all the unforgettable rounds in the big arenas! We’ll never forget you and you’re our favorite grumpy!"

Jorst recently made a big purchase at Helgstrand Dressage, investing in three new rising FEI horses (Zhaplin Langholt, Atterupgaards Botticelli, Grand Galaxy Win) after returining Jurado Lopez' 2016 Rio Olympic Grand Prix horse Lorenzo, who she never got to compete due to soundness issues. She has now added Deep Impact to her string as a third Grand Prix horse alongside Nintendo and Akeem Foldager.

Jorst has moved her barn to Arroyo del Mar near San Diego, California, to work more closely with Marie Meyers. Deep Impact arrives today in Arroyo. He will join Jorst's other horses including the recently purchased 5-year old Zhaplin.

"Marie comes and trains me two times a month at Arroyo," Jorst told Eurodressage about the recent changes in her dressage life. "I will meet Botticelli in Florida mid February and show him there. Grand galaxy will not come in the spring as there’s so much demand on him for breeding. He’s turning out to be an amazing breeding stallion."