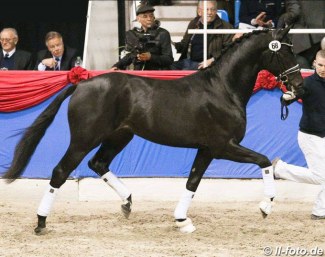 As Hanover was able to boast stellar auction prices for a significant number of stallions at their licensing in October, it was eager awaiting what Oldenburg would do this year. Auction prices are being heavily discussed in the breeding world for being fake because of pre-arranged deals, which has led to a loss of confidence and credibility in the auction system. It stood out in Oldenburg this year how few stallions were offered for sale. The 2018 licensing did not yield the strongest crop in overall quality, but there were many interesting young sport stallions to be seen.

Several trends were noticeable in Vechta this year: the licensing lot was dominated by offspring by For Romance and Morricone. Both stallions produced a collection of very beautiful young colts which are typey, modern and athletic in their conformation. The For Romance offspring could have had more power in the engine and the Morricones all appeared quite skiddish and sensitive in the arena. Many colts presented were not Oldenburg registered, which for this society automatically rules them out from the premium ring. Several stallions owners deliberately opt for the Westfalian licensing where their non-Westfalian registered colts can still make it to the premium ring. Furthermore, when KWPN registered stallions are presented in Germany and not Holland, a red flag automatically goes up as it could mean that there are X-rays issues which rule them out from KWPN licensing.

Forty-six stallions were entered for the 2018 Oldenburg licensing, two dropped out and 29 were approved. Seven stallions received premium status.

With no real "pure" Oldenburg bred super star standing out this year in Vechta, the Oldenburg licensing committee had no other choice but to name the Oldenburg registered, yet Danish bred and Dutch sired Global Player the champion. The tall, modern, long legged and large framed colt was impressive from start to finish.  Sired by Grand Galaxy Win T (by Apache x Jazz x Zeoliet - an interesting cocktail of very temperamental stallions) out of the Danish internationally competed mare Chatel's Shurana (by Don Schufro x Rawage Quintus x Donauwind/T), this black colt is bred by Henrik Hansen (breeder of Fiontini) and owned by Hansen in partnership with Andreas Helgstrand. He was originally named Grand Canyon, but after the licensing they decided to go for Gigabyte. On Tuesday 27 November the owners switched names again and went for Global Player.

On the lunge line, the colt stood out with his nice front, quick hindleg and much cadence in trot. He moved in a lightfooted way. In the canter he could have shown more hindleg under the body and in all the excitement he showed several double beats in canter. There was very little canter shown on the right lead. The walk was good. In freedom he carried his head quite high, but was light and quick off the ground with a strong, pushing hindleg.  Global Player was the strongest moving colt in the lot with a lot of expression and frame. At the licensing Paul Schockemohle obtained a co-ownership in the stallion, so he could secure the black for the German market.

The international pedigree of the black colt with a strong Dutch and Danish influence prompted Oldenburg breeding director Wolfgang Schulze-Schleppinghoff to take a politically correct, pro-EU stance in his clarification why the committee made this stallion the champion. "He is a mix of the best European lines. We have to look in all directions and put the best to the best," said Schulze-Schleppinghoff. "On the lunge line it can't really better," he opined, "the swing through the body, the power behind, He's a pretty type and hopefully he'll produce many foals."

Weihgand (by Diamond Hit out of Weihcine (by Furst Heinrich out of Weihegold) was named the reserve licensing champion. The 2.5 year old was originally sold to Lone Boegh Henriksen as a foal, but the Danish stallion owner returned it. At the licensing pre-selection Isabell Werth's sponsor Madeleine Winter-Schulze acquired the stallion as another future hope for Werth.

The dark bay Weihgand is a very strapping lad: beautiful face, cresty neck, not the biggest at 1.66m. On the lunge line he flexed the hocks well but they could have more under the body towards the point of gravity. In canter there was a good uphill jump and overall he showed much elasticity. He became a bit wide behind in walk. In freedom his elasticity stood out, his pretty front and the good rhythm and ground cover in walk. The weaker point in this stallion is his entire middle section: the sunken back which sometimes creates the impression that the stallion moves in two pieces despite his dynamics.

It was interesting to hear Schulze-Schleppinghoff in public the trend which has annoyed many breeders before: the lack of colour within Oldenburg, when the breeding director stated that Weihgand had the "fitting colour". The dominance of bay/dark bay/black not only in Oldenburg but also with the other warmblood breed societies has become boring and limited. This year in Vechta the amount of chestnuts was again very low and not a single grey horse or horse of other colour was presented.

For the third year in a row, a beautiful black Millennium colt out of Hartima (by Rubin Royal x De Niro x Rubinstein) was presented at the licensing. This year the third full brother of licensing champion Morricone I made his appearance and Morricone III finished third in the premium ring.

The compact black stallion has much expression with a lovely face and neck. On the lunge line he showed much cadence and swing in trot, but in canter the colt struggled with the balance and self carriage. The walk was good. In freedom and in hand the walk was very nice and the trot excelled in rhythm with good power from behind.

Owned by Albert Sprehe, this black stallion became the dressage price highlight of the auction selling for 180,000 euro to the Celle state stud.

The four other premium stallions were all ranked in place four. This group in fact contained some of the most interesting sport prospects the licensing offered.

The chestnut First Deal (by Floriscount x De Niro x Matcho AA x Akut - out of De Noir and Walt Disney's dam line) is bred by Virginia Urbath and was presented by Clemens von Merveldt. On the lunge the stallion moved in a very functional way with a good hindleg and clear walk. He sometimes got a bit slow behind, but there was strength in the engine. In freedom he could have engaged himself a bit more, but the quality is there and in canter he was tense but uphill. The Warendorf state stud acquired this boy for 135,000 euro.

The heavy, black For Romance x Sevillano xx showed much cadence and ground cover in freedom and had a clear 3-beat in canter, but the walk was limited and unconvincing. Although this colt was typey he is quite full bodied for his age. Bred by Gerd Pigge and owned by Lodbergen, he sold for 85,000 euro to a German client.

The dark bay Danone x Furst Romancier x Florencio, bred by Katja Schiele-Jenei and owned by Heidi Schiele, is a very interesting young sport stallion. His cute head and neck, his good walk, and engaged hind leg were attractive. On the lunge line the stallion did move on two tracks. In freedom the canter could have been more uphill and in trot he got a little slow behind but the walk was nice. This boy comes across more as a sport horse than a breeding sallion. He sold for 40,000 euro to Germany.

Paul Schockemohle's bred and owned Morricone I x Sir Donnerhall x Diamond Hit is a tall, long legged chap who takes more after Sir Donnerhall than Morricone. He is still quite green looking with not so much development in the neck yet. On the lunge line he was a bit skiddish and tense in canter and he could have used the back in a stronger way. In freedom the hind leg was active, but needed to reach more under. Danish stallion owner Lone Boegh Henriksen became a co-owner of large framed stallion at the licensing.

The most interesting Morricone of the lot was the gorgeous, refined chestnut Maserati HDS (by Morricone x Hotline x Davignon II), bred by Agathe Stempflin in France and owned by André Bastady. This beautiful colt appeared very babylike, but was elegant and with good cadence in trot on the lunge line. He was tense in canter though, but the handler who lunged him failed at his job in giving this young colt the necessary support and direction on the line. In freedom he was quick off the ground in trot, but could engage more despite the nice suspension. In canter the back needs to swing more. The walk was good.

One of the best selling colts at the licensing was the approved Feiertanz (by For Romance x Fidertanz), which sold for 170,000 euro to Latvia. On the lunge the bay colt was lightfooted and quick in trot, but rushed in canter so that he lost the 3-beat rhythm. The tail was often stiff as the back needed to swing more. This colt takes more after Fidertanz than For Romance in his way of moving and conformation (back).

Atterupgaards Barcelo (by Bon Coeur x Caprimond x Donnerhall x Pik Bube), bred by Kristine Munch Nielsen and owned by Atterupgaard in partnership with Helgstrand, impressed with his shoulder freedom, love expression, and a good engaged hind leg, which should carry more. The walk was good.

MSJ Benchmark (by Bordeaux out of World Young Horse Champion medal winning Deja Vu (by Dacaprio x Gluckspilz) is the only colt out of Deja Vu and was presented at the licensing by French Grand Prix rider Jessica Michel-Botton and her Belgian husband Gilles Botton. Bred in Britain at Mount St. John, this chestnut showed himself as a lovely, talented sport horse with the trot as best gait, but did not have the stallion expression. He sold at auction as a steal for 20,000 euro and will move to Sweden.

More British breeding success in Vechta: Christine Hood saw her Force Majeure (by For Romance x Stedinger x Friedensherr) approved. The black showed much elasticity in trot, was lightfooted but could move more up in the frame. The walk was ok in overtrack but the rhythm could have been clearer. In canter the hindleg stayed a bit too straight. The owners bought him back at the licensing for 35,000 euro.

Paul Schockemohle's Dante Weltino out of Gesina (by Sir Donnerhall x Don Schufro) was a lovely colt too. He had lots of elasticity and uphill tendency on the lunge line but lacked some strength behind. He stands toe out with the left hindleg.

The Fiderdance x De Niro impressed more in freedom than on the lunge line. On the lunge he pulled the hocks high and out despite his scope in front. In freedom the trot was very impressive, but the canter stiffer.

The wonderful First Date (by Furstenball x Dancier x Sandro Hit) made an impression with his good looks, lovely disposition and quality gaits. Bred by E Thaden and listed as owned by Pauline Funk, this dark bay colt had three good basic gaits and the looks to boot. The hindleg could have been more powerful, but it was functional. The colt is apparently owned by the Dutch trio Tim Coomans, Jacques Maree and Koen Brinkman.

The committee surprised by licensing the not so convincingly moving De Niro x Rohdiamant, the Furstenball x Charmeur who was great on the lunge line but had no walk, Liborio STMT (by Jazz x Ampere x Michelangelo -the pedigree speaks for itself when it comes to temperament) who was a handful, and the old-fashioned and heavy Millennium x Donnerball.