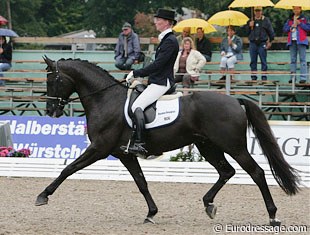 It is remarkable how few international Grand Prix riders take the opportunity to show their young horse prospects at the World Championships. The top seeded riders in the FEI ranking can automatically qualify their youngsters without having to do selection trials but not a single one of them takes the chance to do it.

This year, Dutch Imke Schellekens-Bartels showed her young KWPN stallion Voice (De Niro x Rohdiamant) and finished 10th with 7.98. The black stallion is quite heavy boned and lacked some balance and strength in trot and canter, but the walk was good and especially the position of Voice's head was consistent throughout the ride.

Fourth horse to go today and one of the first to actually leave a really good impression was the Belgian warmblood gelding Cleverboy van de Abelendreef. This black Donnerhall x Rubinstein offspring stood out with his balance, regular rhythm and lovely rideability.

Under Vicky Smits, Cleverboy presented himself in a very harmonious way. He might be a tidbit old fashioned in looks, but his self carriage and lightness were delightful.

It was whispered in the stands that Don Auriello was one Germany's hottest horses here in Verden, but the bay gelding could not live up to this rumour. The long-legged, elegant mover has a dream front leg, but was not engaged and powerful behind today. 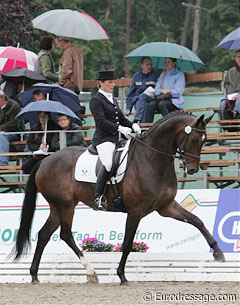 Even though Birgit Wellhausen-Henschke presented him masterfully in an uphill frame. The canter was not totally clear in its rhythm and the walk could have been more relaxed. The pair finished 15th with a score of 7.58 and is one of the hopefuls to win an entry in the finals by placing in the top two in the consolation finals tomorrow.

The best American combination in the 5-year old division was 2007 Pan American individual gold medallist Christopher Hickey aboard the American bred Cabana Boy (by Contucci x Bordeaux). The combination placed 16th with 7.42. Cabana Boy, who is owned by Hilltop Farm, was not at his best today. The contact with the bit was very unsteady and the horse was never through and loose in the back. He moved in two pieces with the hind legs not tracking up well enough. The highlight of the test, however, was the posting trot moment when the horse chewed the bit with long reins. Cabana Boy stretched into the contact and showed more self-carriage.

A delightful pair was the Australian Grand Prix rider Maree Tomkinson on the bay Oldenburg mare Diamantina. Bred by Quadriga Pferdehaltung, Diamantina is by Diamond Hit out of the Grand Prix mare Cosmopolitan (by Campari M). Tomkinson presented her in a good rhythm, but the mare was sometimes tight in the neck and could have moved with more power from behind. The walk was good but could have been more over the back and the canter showed an active hind leg, but could have been jumped more uphill. Small things which will be sorted out in the future for sure. 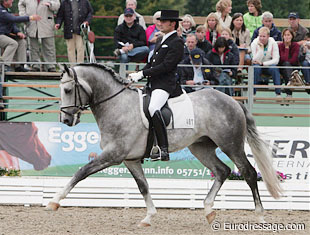 Another interesting breeding product is the Andalusian stallion Jerez. Bred by BG Domecq in co-operation with Ullrich Kasselmann from Germany, Jerez is one of the first internationally competed PRE cross breeds. Sired by Duque IX and out of a Florestan dam, Jerez is a strange mix with an Andalusian front part (neck, knee action) and warmblood hindquarters (which lacked power and engagement unfortunately).

Three top quality horses in the 5-year old division did not have their day: Vivaldo, Chatel's Shurana and China Town's Dream. All three of them have extraordinary gaits but show pressure crawled under their skin and the riders could not keep the lid on the cooker.

Expected to be the strongest Dutch candidate here in Verden, Vivaldo (Polansky x Montecristo) showed phenomenal gaits but was out of control. Resistance, tension.. not his day. May he redeem himself tomorrow in the consolation finals.

Pity that Chatel's Shurana did not live up to the expectations as one of Denmark's top horses. This cool Danish warmblood mare by Don Schufro x Rawage Quintus became extremely bold in the hand and was spooky round the ring. The horse showed an unbelievably talented trot with a fantastic hind leg, but tension messed up the walk and there were mistakes in the rein back and transition to canter. What a pity.

More sadness round the ring when the Belgian warmblood mare China Town's Dream was eliminated. Upon entering the ring under Vicky Smits, this black Pavarotti van de Helle x Furioso mare had seen ghosts near the judges' box and tensed up completely. Panic crept over her body and by the time the canter work came round her fleeing instinct was set in motion. Too much resistance, but what a pity because this mare can move! The picture says it all.