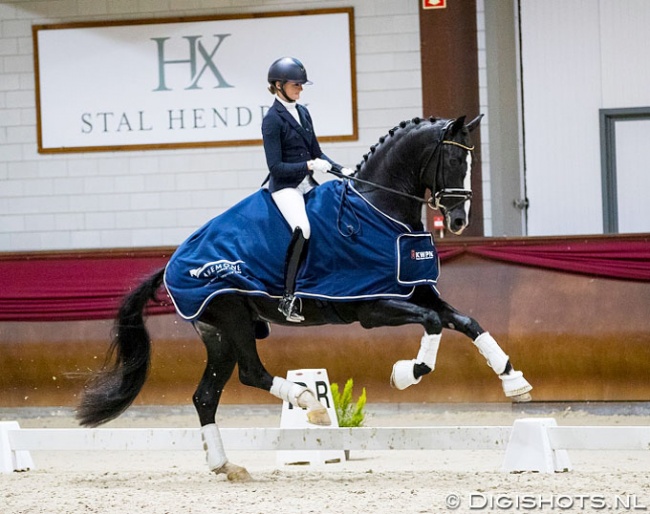 The 4-year old Jameson, the 5-year old Imposantos, and the 6-year old Hermes became the winners of the first qualifier for the 2019 KWPN Stallion Competition Finals to be held at the 2019 KWPN licensing in 's Hertogenbosch in February.

The first of three qualifiers took place in Kronenberg, The Netherlands, on 19 November 2018. The KWPN Stallion competition is mandatory for Dutch warmblood licensed stallions born in 2014 and 2015. Especially in the 5-year old division a large group of stallions were absent from the first qualifier: Invershin, It's a Pleasure, Inspire, Incognito, and Improver VDT.

The M-level divisions for 5-year olds  was dominated by Bart Veeze aboard her World Young Horse Championship finalist Imposantos (by Wynton x Krack C). He took first place with 89 points, ahead of Emmelie Scholtens on the KWPN licensing champion Indian Rock (by Apache x Vivaldi) with 88 points. Veeze and Imposantos, who train with Eva Möller, earned a 9 for trot, 8.5 for canter, and 9 for harmony. Indian Rock got 8.5 for walk, trot and harmony. The canter earned 9.5. Renate van Vliet and In Style (by Eye Catcher x Lorentin) slotted in third with 85 points.

Five combinations contested the 6-year old division at Z-level. With the horses turning 7 in 2019 several riders opted to present their stallions in a double bridle. Dinja van Liere and World Young Horse Championship bronze medal winning Hermes (by Easy Game x Flemmingh) won the division with 87 points. The  judges rewarded the harmony with a 9. Italian Riccardo Sanavio and the Austrian owned, German bred Trafalgar (by Totilas x Lord Loxley) were the runners-up with 84 points, while Van Liere and Geniaal (by Vivaldi x Biotop) were third with 83 points.