Wynton Retired at Stud in Canada 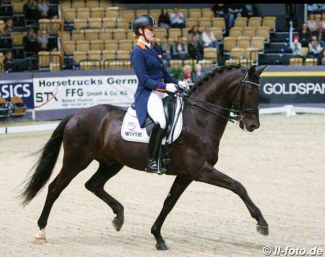 The 15-year old KWPN licensed keur stallion Wynton has been retired as international Grand Prix sport horse and sold to Canada where he will stand at stud.

Only two weeks after announcing the sale of KWPN licensed stallion Zhivago to Canada, Marie Josee Proulx from Canadream Farm in Ontario, Canada announced that she has also bought Wynton.

Bred by J.M. Jansen and owned by Nico Witte, Wynton is by Jazz x Matador.

Wynton was licensed in 2006 and became the 2007 Stallion performance test winner. Under Madeleine Witte-Vrees he was highly successful as a young dressage horse, winning the 2008 Pavo Cup Finals, the 2008, 2009 and 2010 KWPN Stallion Competition. Wynton also represented the KWPN society at the 2008 and 2009 World Young Horse Championships in Verden, Germany, where he finished 4th and 7th in the Finals.

Witte-Vrees trained him to international Grand Prix level. A severe injury sidelined the stallion for three years, but in 2017 he made his come back in the show ring. He only did one show in 2017 (CDI-W 's Hertogenbosch) and one in 2018 (CDI-W Neumunster) as he kept on struggling with returning injuries. At the 2018 CDIO Uggerhalne Wynton failed the vet check and it was the end of his sport career.

"I have always loved Wynton. (He has) great mechanics, great type," Proulx told Eurodressage. "I own a Wynton mare and love her. Wynton will be retired at stud with Zhivago. I'm waiting for a flight. He will be home in December. I'm very, very excited."

So far, Wynton has produced five licensed sons. He was proclaimed keur stallion in 2018.