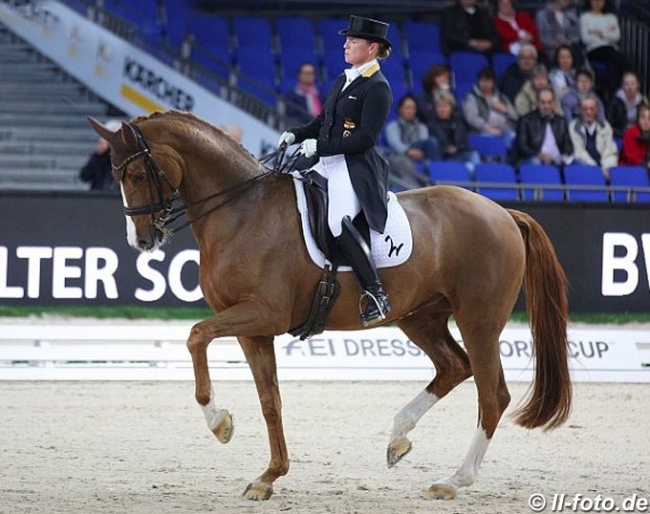 She has won everything there is to win in her sport, many times over, but there was a huge sense of achievement for Germany’s Isabell Werth (49) when she steered Bella Rose to victory in the third leg of the Dressage World Cup™ 2018/2019 Western European League at the German Masters in Stuttgart (GER) on Saturday 17 November 2018.

"This was her last show before her injury four years ago, so to come back today and to win like this is something special," said the super-champ who scooped double-gold with the 14-year-old mare at the FEI World Equestrian Games™ 2018 in Tryon, USA two months ago.

On a day when Germany dominated the podium as Werth’s Rio 2016 Olympic gold-medal-winning team-mate, Dorothee Schneider (49), finished second with Sammy Davis Jr and 2013 FEI Dressage World Cup™ champion Helen Langehanenberg (36) lined up third with Damsey, spectators were treated to a feast of top sport. And the fourth-place finish for Denmark’s Daniel Bachmann Andersen and Blue Hors Zepter was another highlight. Not only was the 10-year-old stallion competing in his very first World Cup competition but he was also doing his very first Freestyle test, yet he was relaxed, confident and full of promise for even greater things to come.

From the outset there was a big buzz in the Schleyer Halle, with The Netherlands’ Emmelie Scholtens and Desperado, who finished last of the 14 starters in yesterday’s Grand Prix, bouncing back to set the standard with a nice pathfinding test at 75.365. Marie Emilie Bretenoux and the expression-filled Quartz of Jazz from France kept spectators spellbound with their intriguing floorplan for a mark of 75.225, and then seven-time Olympian, Sweden’s Tinne Vilhelmson Silfven, pushed the target score up to 79.670 with the veteran Don Auriello.

But Germany’s Benjamin Werndl was the first-half show-stealer when, last before the break with the 14-year-old gelding Daily Mirror, he carried the crowd through a test that oozed energy and excitement to throw down a new marker at 80.340.

With extraordinary accuracy and control, Langehanenberg went into the lead when posting 81.470 when fourth-last to go, and she was still out in front when Bachmann Andersen put 81.190 on the board. But it was compatriot Dorothee Schneider’s 81.840 that Werth was chasing when last into the arena. And she nailed it by a considerable margin, posting 85.660 despite one major blip.

"She was a bit tense in the canter work and I got behind the music, so I had to push it and that was the reason for the mistake in two-tempi," said Isabell Werth (GER).

But as the athlete who has collected eight World Championship and six Olympic gold medals pointed out, “she was brilliant again for the rest of the test. The piaffe/passage couldn’t have been better and her half-pass extensions were super!” she said, and that was borne out by the number of maximum scores she earned from the judges which put the result beyond doubt.

Today was some busy day for the defending series champion who will be going for a back-to-back hat-trick of wins, and her fifth in total, at the Final in Gothenburg (SWE) next April. It began with a practice ride at 06.00 and then a win riding Emilio, with whom she topped the qualifier in Lyon (FRA) two weeks ago, in this morning’s German Dressage Masters before flying to Northern Germany for an awards ceremony and then rushing back to compete in this afternoon’s FEI World Cup qualifier.

Werth however seems to thrive on pressure, and she really wanted to show the home crowd that her precious mare is back to her best after that long four-year injury break during which she was patiently nursed back to full health. “It was a special situation and a special atmosphere here today, the arena was absolutely full of spectators and a lot of horses were tense and spooky, but Bella Rose was fantastic, she really wanted to give everything, she was just brilliant!” Werth said.

The Western European League series now moves on to Madrid (ESP) next weekend.