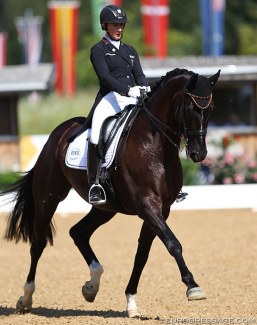 Diabolo is a 10-year old Hanoverian gelding by .

Under Johanna von Fircks the tall black competed at the 2013 World Young Horse Championships in Verden, Germany, where they were 13th in the 5-year old finals. At the 2014 Bundeschampionate the pair finished 29th in the preliminary round.

In 2018 they made the switch to young riders' level and again became second team reserve for this year's Europeans. They placed right behind the top 10 at the 2018 German Young Riders Championships.

Cosima von Fircks has decided to continue with Easy Fellow and some young horses and Diabolo has now moved on to German pony rider Laura Stuhldreier, who will make the transition to junior level with him.

Stuhldreier is based in Munster and began competing the palomino Tesio at international FEI pony level in 2016. As of 2017 she added Chantre to her string.