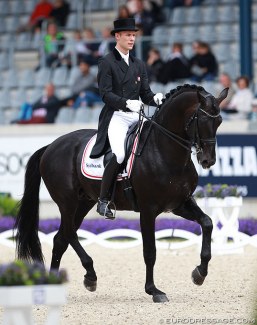 The 15-year old Hanoverian stallion Hotline has returned home to Blue Hors stud in Denmark after having stood at stud for one year at the Warendorf state stud in Germany.

The black stallion (by Hofrat out of De Nira (by De Niro x Wendepunkt x Busoni xx)) was originally leased to the Warendorf state stud with an option for three breeding seasons in total.

According to Zuchterforum, Blue Hors stud was unable to reach Warendorf's managing director Kristina Ankerhold to discuss a continuation of the lease after the first year.

Blue Hors stud picked Hotline back up from Warendorf on 5 November 2018.

Hotline was named the Danish Warmblood Stallion of the Year 2016. He competed at international Grand Prix level but was retired from sport due to a niggling injury.