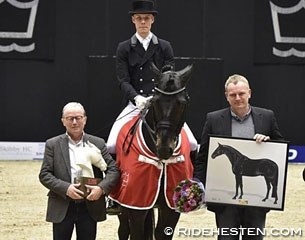 The Hanoverian bred stallion Hotline has been proclaimed Danish Warmblood Stallion of the Year 2016 at the Danish warmblood stallion licensing in Herning, Denmark, on 20 March 2016.

The Danish warmblood society proclaimed its 20th Stallion of the Year this year. They started giving the title to the best breeding stallions for their studbook in 1998. The first recipient was Lucky Light.

Hotline is a 13-year old Hanoverian by Hofrat x De Niro x Wendepunkt and is owned by Kjeld Kirk Kristiansen's Blue Hors Stud. Under Daniel Bachmann, Hotline is competing at international Grand Prix level. He was licensing champion in Hanover and Denmark.