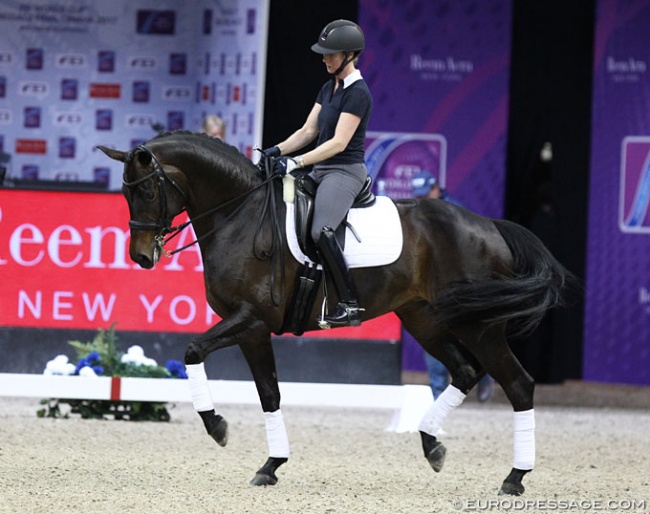 Hello Halli is a Hanoverian mare by Hochadel out of Donata (by De Niro).

Previously owned by USEF ‘S’ Dressage Judge Janet Curtis in partnership with Peggy Grau, Hellohalli was discovered in Germany by Curtis, who purchased the mare from Dee Loveless. Hello Halli was sent to California as a 4-year old, where she continued her training and was shown by Lientje Schueler and Jessica Havey. In 2017 Hello Halli and Sabine Schut-Kery achieved scores well into the seventies at Intermediaire I level.

“I was very fortunate to have been given the opportunity to ride Halli when Sabine left for Europe to further develop Sanceo last fall,” said Cherry. “I knew the mare was listed for sale and the plan was simply to continue strengthening Halli to prepare for her first Grand Prix. Sabine had done a fabulous job and she was already very close."

"I wasn’t even thinking about Halli being a horse for me to purchase, but from the moment I sat on this mare we had a connection," Cassie continued. "She is extremely sensitive, but so very smart and always gives me 110%.  She never says no.  Horses like that don’t come around often, I am just thrilled I can now continue riding her.  We have a strong team solidly behind us and I am beyond excited for our future together.”

Cassie Cherry Nolte is based in Laguna Hills, California.  She will continue to be coached by Janet Curtis in preparation for the 2019 season and is focused on becoming a strong contender on the road to Tokyo in 2020.