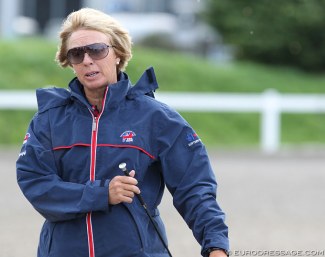 Judy Harvey will be replacing David Trott as British Dressage's International Team director. The BD board ratified the appointment of Harvey at their annual General Meeting.

International Director David Trott is standing down for personal reasons.

"David was elected in 2012 and has made a significant contribution to the performance of our teams internationally, as well as to the sport generally at Board level," said BD's press officer. "David has agreed to remain a member of the Senior Selection Panel so BD will continue to benefit from his invaluable knowledge, insight and support for our Senior teams."

Judy Harvey has been appointed as an Interim Director, responsible for International Teams. Judy has a strong CV to take on the role, having ridden and judged at the top levels internationally, with a comprehensive understanding of the international landscape. Judy will continue to be a Senior Selector.

BD Chairman Linda Whetstone commented; “We’re desperately sorry to be losing David’s excellent knowledge at Board level, although we are very thankful he’s agreed to stay on as a Senior Selector. He did an outstanding job last year across all our international teams, but it became apparent that concept of sitting on the panels for all of our Under 21 and Senior teams was just too much for one individual to take on. This new approach, with the addition of an Independent Chair for all selection meetings, should work much better in practice. Judy has already made some useful contributions at her first board meeting we are delighted to have someone of Jenny’s stature to succeed me on our Senior Selection Panel."

Changes and Appointments to the Under 21 Structure

Following the membership vote to appoint an Interim Chair at the AGM, Linda Whetstone has retired from her position on the Senior Selection Panel.  Former Pony Selector, international competitor and List 1 judge Jenny Ward has been appointed to the panel in Linda’s place, and will work alongside Judy Harvey and David Trott as the three Senior Selectors.

Following full evaluation of the 2018 season for the four Under 21 squads and further consultation with our team officials at a recent International Teams meeting, the BD Board have also agreed that a new single Under 21 Selection Panel should select for Pony, Children on Horses, Junior and Young Rider teams. Nikki Herbert and Leanne Wall, who looked after the Junior and Young Rider squads under the previous structure, have kindly agreed to take on the additional responsibility for Ponies and Children on Horses.

The Chefs d’Equipe for the Under 21 teams will be taking a more active role in managing the squad preparation and training programmes throughout the year, with the trainers and coach advisor also more involved to support athlete development, thereby allowing the selectors to focus on competitions and the respective annual FEI Championships.

There will be an Independent Chair on each of the three selection panels, an initiative that was successfully introduced for the Seniors and Paras this year and will now be extended to our Under 21 teams, to provide additional oversight and ensure that the selection process is in accordance with the published selection policies.

“In the area of under 21s, the Board felt that bringing in a single panel to oversee the selection of all squads, with the trainers and Chefs working more closely with the riders and their support teams, would be a strong move and will build better rapport and continuity," Whetstone commented. “Having been involved in selection for a number of years, it’s a tough role. There are many balls to juggle, tricky decisions to be taken and plenty of emotion involved from those competing for a place on our Championship teams.”