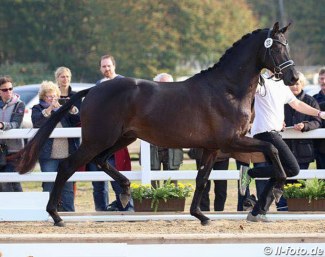 The ownership battle over the 2017 Trakehner Licensing Champion Kaiser Milton between Burkhard Wahler and Jan Pieter Dalsem has taken a new chapter and landed into court.

Wahler acquired the black stallion in Neumunster for 320,000 euro at auction, in addition to 60,000 euro in taxes. The stallion was owned by the Dutch entrepreneur Jan Pieter Dalsem who bought the horse as a colt at the Prinsjesdag auction.

However, the stallion proved to be lame and unhealthy and Wahler asked for restitution from the Trakehner Society which had auctioned the stallion. Wahler never paid the auction price.

The stallion was treated in the equine clinic, initially for lameness but it was also discovered that he had four leaky heart valves. Wahler stated that the stallion would be unsuitable for sport.

The two opposing parties Wahler and Dalsem/Trahner society have now met in court in Kiel, Germany, and it will cast a verdict on 22 November.