Malin Nilsson, A National Victory with a Foreign Affair at 2018 CDI Flyinge 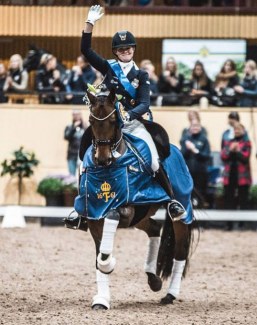 It was a Swedish victory on home turf for Malin Wahlkamp-Nilsson, who says the weekend at the 2018 CDI Flyinge on 27 - 30 September 2018 was “just amazing”. Taking home a double win in the small tour with her return ride Foreign Affair, she also claimed a double placing in the Grand Prix on board 12-year old mare Syriana (by Donnerhall).

Scoring 75.147% in the Prix St Georges and 78.209% in the intermediate I kur, Malin rode her come back kid Foreign Affair, an 8-year old Dutch warmblood gelding by Rock Forever x Scandic x Cocktail, who was originally named Filur. Nilsson said that he is a "rockstar."

“He loves to compete and he has a lot of confidence, but at the same time he is super funny and cute,” says Malin.

Foreign affair actually has had quite an interesting two years. After arriving at Patrik Kittel’s stable in 2016, the horse was sold last year to the Rothenberger family in partnership with Ralph Uwe Westfhoff after his performance and 74.976% score in the Nurnberger Burgpokal qualifier at the 2017 CDI Hagen. His performance and quality captured a lot of attention. However, the horse was returned to Patrik Kittel's yard to be sold again after 12 months, even though Sanneke Rothenberger competed him in July 2017 and younger sister Semmieke in April this year.

With the ride returned to Malin, the Swedish native who is based in Appelhulsen, Germany, took the opportunity with open hands. Malin did not provide a reason for the horse's return, but mentioned that he is "in really good shape."

“Filur is here to be sold," she said. "He has been going super. He came back in really good shape and he has developed a lot and he is already training everything for Grand Prix."

Her second horse, Grand Prix mare Syriana, is still green to Grand Prix level , but even so earned herself a 6th in the Grand Prix with 69.087%  and a 3rd in the Grand Prix kur with 71.870%. Sold through Hof Kasselmann to dressage afficionado Frank Henning, Syriana is a 12-year old Westfalian mare by Sir Donnerhall I x Bormio xx x Werbefunk. The black was previously competed by Christine Henning, but Malin took over in the spring of 2018.

“Syriana is still not that experienced but she is fun to ride with a lot of talent and she really wants to do a good job. She is fighting for me in the ring,” Malin commented.

When comparing the two horses, Malin says that Syriana is more serious and she is a lady, whereas Fulir is more playful.

Malin’s plan with both horses is to keep on educating them, have fun, and see where time takes them.

“With Filur we are working on the Grand Prix stuff to get that established, and to get him stronger,” added Malin.  “Syriana , on the other hand, needs to get more experience, so we are going out more to compete and work on her confidence and strength in the ring.”

Looking to the year ahead, Malin is excited to say they have some really nice horses coming on and she is “super excited” about next season.

When asked what she does outside horses Malin says that leisure time is rather limited.

“Outside horses not much," she admitted. "I have three horses in addition to my work at Patrik’s stable, but I am trying to spend some time with my husband and friends.”