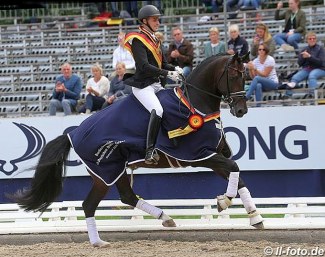 After a preliminary round that featured a gigantic amount of 79 combinations, no less than 24 (usually 15) qualified for the Finals on Sunday.

Zucchero is Sugar to the Judges' Palate

The hot favourite for the title was Zucchero, who won the qualifier for the finals with 9.2 as only horse to score over the magical 9 barrier. In the Final, judges Kerstin Holthaus, Henning Lehrmann and Ulrike Nivelle liked the horse even more and rewarded it with a total of 9.4, the highest score given to a riding and dressage horse or pony at the 2018 Bundeschampionate.

Zucchero (by Zonik x Prince Thatch xx) scored 9.5 for walk, 9 for trot and canter, 10 for submission and 9.5 for general impression. His rider Frederic Wandres, who is one of the key riders at Hof Kasselmann in Hagen, Germany, was thrilled with his horse's performance.

"On both days he felt super, giving a 100%. From a rider's point of view he was much better than in Ermelo, because everything came with more power. He just gave himself fully."

Zucchero is bred by Hans-Heinrich Brüning and was discovered by Ulli Kasselmann as a youngster. He became the 2017 Oldenburg Young Horse Champion and in December that year the stallion sold at the 2017 PSI Auction for 370,000 euro to the Asian investors' family, incorporated as Star Horses. Under Wandres, the strapping stallion finished fourth at the 2018 World Young Horse Championships in Ermelo, The Netherlands, and now added the Bundeschampion's title to his list of achievements. For Wandres, the 2018 "BuCha" were a glorious event as he also won the 4-year old riding horse champion's title on Bitcoin OLD (by Bordeaux), who is to be sold at the 2018 PSI Auction in December.

"For sure this is a dream come true," said an ecstatic Wandres. "But having a 9.5 and a 10 for rideability with both of them shows me that my way of education and the riding at Hof Kasselmann are on the right way. That makes me also a little proud

Leslie Rohrbacher and Heidi Bouws' Hanoverian mare Schöne Scarlett were the winners of group 2 in the preliminary round with 8.8. and they finished second in the Finals on a total score of 8.7. The elegant, feminine looking mare got sandwiched on the podium by two Zonik stallions.

Bred by the owner, the dark bay mare by Scolari x Londonderry scored 9 for walk and trot, 8.5 for canter, 8 for submission and 9 for general impression. A small error in the rhythm in a trot lengthening and in the turn on the haunches tampered with the score.

All eyes were on Van Lierop's stallion, which his sponsors Jacques and Saskia Lemmens of RS2 Dressage purchased for him at the 2017 PSI Auction. The impressive stallion, who is a mirror image to sire Zonik, was the auction price highlight selling for 850,000 euro and such a high price tag immediately adds expectation to the horse's name.

Some blood-thirsty people in the crowds of course love to say "this horse is not worth that money", but Van Lierop certainly proved the detractors wrong in Warendorf. While the stallion was not able to go beyond the consolation finals at the 2018 World Young Horse Championships in Ermelo at the beginning of August, Van Lierop kept faith and patiently steered his horse from a 9th place in the preliminary round, to a fifth in the consolation finals. Two errors of course in both rounds kept the pair from immediately qualifying for the Finals.

Fortunately the brain power, focus and skill were all there in the last test on Sunday and Van Lierop landed a third place and bronze medal with an 8.6 total score. The stallion for 8.5 for walk, trot and canter, 8.5 for submission and 9 for general impression.

One of the crowd favourites in Warendorf were German B-squad Grand Prix rider Bernadette Brune, who made her show debut at the Bundeschampionate, aboard the Oldenburg mare Feel Free OLD (by Foundation x Sandro Hit). The bay mare, who is bred by Indira Wallner, was initially started by Brune's assistant trainer Anja Engelbart but this year Brune took over with success. The duo was second in the preliminary round with 8.40 and they reconfirmed that score in the finals. The mare earned 8 for walk and canter, 9.5 for trot, 8 for submission and 9 for general impression.

Lena Wadlmann and Gestut Bonhomme's home bred Hanoverian gelding Friend for Life (by Fiorissimo x Sir Donnerhall) slotted in fifth with 8.4. They were third in the preliminary round on 8.3 and in the Finals added 0.1 point to that total score. The dark bay gelding got 8.5 for walk, 9 for trot, 8 for canter and submission and 8.5 for general impression.