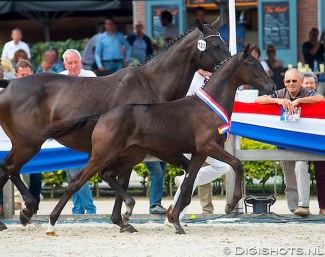 The filly Nina Ricci (by Franklin x Uphill) was named the 2018 KWPN Foal Champion at the annual KWPN Championships held in Ermelo, The Netherlands, on Friday 17 August 2018.

A group of 11 foals was selected for the champion's ring to fight for the KWPN Foal Champion's title.

Judge Petro Trommelen commented that the top lot are "all foals that move easily with good technique. Striking is that all finalists are almost all by different sires. We didn't select on that but it is a good sign about the large breeding base. Franklin was the only one with two offspring in the finals, amongst them the champion."

The black filly Nina Ricci received the champion's sash. She is bred by brothers Martin and André van Norel and is out of keur mare Felice.

"A foal with much type and a striking shoulder. She trots and canters with much power and expression," said Trommelen.

"A foal that moves uphill and shows good ability to collect and extend," Trommelen stated.

The colt Nyandro JZ (by Geniaal x Jazz), bred and owned by Zeewuster and J. de Jager, landed third place. He stood out with his suppleness and lightfooted canter.