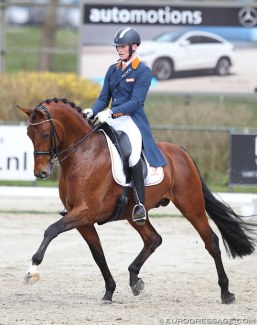 Diederik van Silfhout's rising Grand Prix horse Expression has been submitted to the Dutch NOP support programme to secure the horse for The Netherlands until the 2020 Olympic Games.

The 9-year old Expression (by Vivaldi x Jazz) is bred by G.W. van Norel and owned by the breeder in partnership with Alex and Jannet van Silfhout.

"Expression has a lot of potential. Despite the fact that he's a young horse at the highest level, he shows much routine in the test. You can leave that to Diederik," said Dutch team trainer Rien van der Schaft.

Ten Dutch horses in total are supported by NOP, only three of them are dressage horses: Expression, Zonik and Avanti.