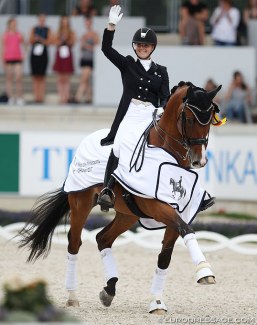 Anne Meulendijk's Grand Prix horse Avanti has been submitted to the NOP Sponsorship Plan in the lead up to the 2018 World Equestrian Games in Tryon, U.S.A.

The N.O.P. (Dutch Olympic Horse) Foundation is a project of the Dutch Equestrian Federation in partnership with the Dutch Olympic Committee and Rabobank. Their goal is to keep top performance horses in the Olympic discplines in The Netherlands for Dutch riders to campaign.

NOP was first established in 1980 and ended in 1990. The project was re-established in 2013 and offers a monthly financial fee to the owners of the horses for them not to sell their horses.

The latest dressage addition is Anne Meulendijks' 12-year old Avanti (by United x Farrington). The pair won the CDIO-U25 in Aachen and won silver at the 2017 European Under 25 Championships.

"I've been on cloud nine these past few weeks, but today it's official," Meulendijks gushed. "Avanti will now go through life as MDH Avanti N.O.P. This is so cool."

Previous NOP dressage horses were Diederik van Silfhout's Arlando (who sold to Denmark in the spring of 2017), and the now retired Grand Prix horses Siro, Undercover and Parzival.