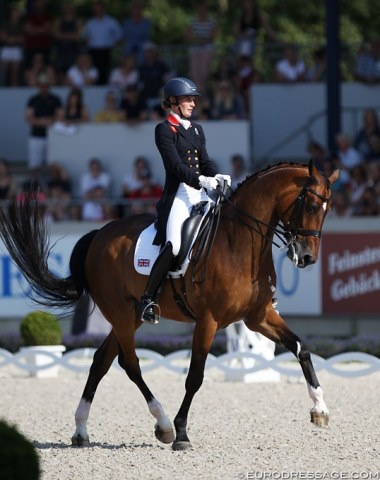 British Dressage has decided to announce a short list instead of the actual team for the 2018 World Equestrian Games in Tryon, U.S.A. on 12 - 15 September 2018.

Great Britain is one of the last, leading European dressage nations to disclose its actual team for Tryon. While Germany, Denmark, Sweden, and The Netherlands have all announced their teams, Great Britain remains vague and instead has now posted a short list of no less than six combinations in the running for team selection.

The British athletes, who are on the short list, are:

All combinations are required to maintain their current form to remain on the list ahead of the Championships. A total of 8 combinations will be submitted to the FEI on the 13 August 2018, as Great Britain’s nominated entries.

Dressage Performance Manager, Caroline Griffith comments; “I am absolutely thrilled and delighted for the group of athlete/horse combinations named to our short list for WEG. We have a great mix of exciting young horses with experienced riders and established combinations all of whom have performed well this year so I am very, very excited about the World Games.

“All of those campaigning this year have pushed those on the short list hard for their places, a true sign of the strength, depth and quality we have in this country.”

Team GBR added to their statement that, "The dressage team will be announced in the coming weeks." The definite entry deadline is 3 September.