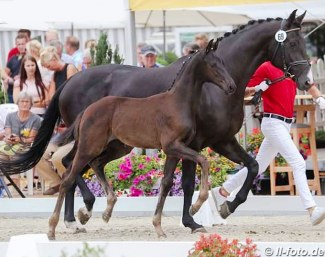 The black colt Furstenklang (by Furstenball x Zack) became the top seller of the 2018 Westfalian Elite Foal auction in Munster-Handorf, which was held on 25 July (for dressage foals) and on 28 July (for jumper foals).

Bred by Bruno Blome, Furstenklang sold for 59,000 euro to a Rhineland based customer.

The second most expensive foal was Feuerherz (by For Romance x L'Espoir) became the second highest priced foal, selling for 29,000 euro to a Rhinelander customer.

Fashion Dream (by Feinrich) switched owners for 26,000 euro. He is out of the same dam as the Westfalian licensing champion Fashion in Black and will stay locally.

The filly For Joy (by For Dance x Sorento) moves stables for 21,000 euro. Two foals sold for 20,000 euro: Quantanamera (by Quantensprung x Quaterback) and Danino (by Danone x Vivaldi).

The average price for a dressage foal at this auction was 10,440 euro.