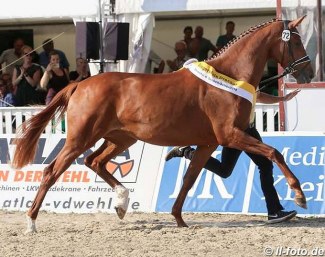 The Rhinelander bred and Dutch sired mare Vanity Fair was named the champion of the 2018 Hanoverian Elite Mare Show in Verden, Germany, on 31 July 2018.

The Hanoverian Elite Mare Show is better known as the Herwart von der Decken show. This year 49 dressage bred mares were selected to take part in this beauty and suitability competition for 3 and 4-year old mares. Former KWPN director Johan Knaap served as guest judge at this event.

Bred by ZG Weneck and owned by Andrea Klüfers and Matthias Fieseler of Rhenania Pferde, the chestnut mare Vanity Fair bested the field. This Vivaldi x Sandro Hit offspring was considered "unbeatable in type and impression, she enthused with spectacular movements."

The reserve champion was Feingefühl (by Furstenball x Farewell III), bred and owned by Gaby Heye-Hammerlage. This mare impressed with her conformation and modern outline.

"We have seen the top of the top today," said Johan Knaap. "It is impressive that many breeders still own the mares. You can be very happy if these mares go into breeding."

Three halfbred mares competed for the title in their crossbred category. Belle Nobless (by Bonaparte N AA/Vulkano), bred and owned by Heide and Helmut Peters, was named the champion.