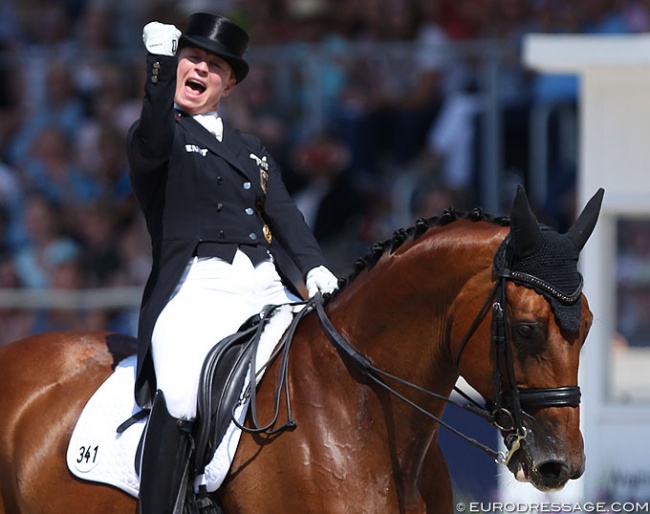 In front of a home audience and munificent judges panel, Isabell Werth won the Grand Prix Kur to Music at the 2018 CDIO Aachen on Sunday 22 July 2018. However it was Danish Cathrine Dufour writing history for her country by becoming the 2018 Aachen Grand Champion with the highest overall score after three rounds.

The entire week the judges panel have been generous with high scores, especially for the star riders, while the rest of the pack had to put it in a more honest fight for each point earned. While the motivation of a higher scoring trend for the improvement and more positive image of the sport is a good one, all riders should be treated with equal measure. Often some poor walks, underwhelming trot extensions, far from ideal bit contact, or blatant mistakes were assessed through rose-coloured glasses, especially with the heroes of our sport.

While the crowds love the Kur, the freestyle to music has too often laid bare weaknesses in the judging system. The reserve starting order for the freestyle, based on the ranking in the Special, works clearly beneficial for the last starters as the scores systematically go out, not always with better rider. Today there were 15 riders in the Kur to Music, and eight scored over 80%!!

Unfortunately three riders had music that fit their horse properly or  was memorable for longer than three minutes post-ride! Dorothee Schneider's tango/samba music had spunk, Kasey Perry's Lord of the Rings kur was properly timed to the movements of her horse and Isabell Werth always plays with fun themes, this time resorting back to some classical Beethoven tunes, spruced up with a funky beat. The rest had either ladida-dingeling-ding music or elevator, filmic compositions that go in one ear and out the other, and three worked on the Celtic theme in the wake of the success of Dujardin's "How to Train a Dragon" freestyle.

Isabell Werth and Madeleine Winter-Schulze's 14-year old Westfalian gelding Emilio (by Ehrenpreis x Cacir AA) were the winners of the Kur to Music and received a standing ovation from the home crowd. Emilio's music is a medley based on classical themes by Beethoven, Puccini and Verdi, but more modernized with a cool beat to them.

After serious miscommunications and two resistance moments in the Grand Prix, Werth switched bits for the Special and rode with the handbrake on but won. Also in the freestyle the contact with very light, not because of true harmony achieved, but it seemed that Emilio could not be disturbed in the mouth this weekend. In the freestyle, he regularly lightly shook his head to avoid the contact, and this was already visible in the first piaffe pirouette. Werth was very careful to ask the right amount of impulsion and motivation from her horse without upsetting him. In the passage the hindlegs were often a bit out as a result. The trot extensions were very nice, the canter half passes well ridden but in the trot half pass left the bay lost some suspension. The extended canter left was a little on the forehand but had good energy. In the extended walk the horse had the hindquarters crooked to the right. Werth was very diligent in asking co-operation from her horse. The two's needed to be more forward and the ones were laboured and not fault-free. The pirouette right was the better one. Isabell finished her ride with a piaffe pirouette followed by one-handed passage, to which the audience enthusiastically clapped along.

After a brilliant Grand Prix Special, American Kasey Perry-Glass and the 15-year old Danish bred Gorklintgaards Dublet (by Diamond HIt x Ferro) continued their Aachen success in the freestyle with probably the best ride of the day!

The halt was not square, but Dublet executed superb piaffe-passage to the music at the start of the test. There was a small hiccup at the end of the extended trot, but the left passage half pass was fantastic. The trot half pass to the left was regular but could have been more elastic. The extended walk had two hooves overtrack but the rhythm was mediocre and in the collected walk he was close to becoming lateral. The two tempi changes were straight but the left extended canter needed to be more uphill. The double pirouette left was good, the right ones were a bit less scopey. The one tempi's neat but not spectacular. They finished the test with a very rhythmical piaffe fan. Overall Dublet needed to have the nose more out as it was consistently a fraction behind the vertical, but the horse was always correctly engaged from behind and regular in his piaffe and passage.

They finished second with 85.205% and out of nowhere have solidly confirmed that Team U.S.A now not only has chances for team bronze medal at the upcoming WEG but that silver (or gold) is wn the cards!

After having to deal with a tense and spooky Verdades in the Grand Prix Special, American Laura Graves recovered well in the freestyle but was not on their best form just yet. The 16-year old Dutch warmblood (by Florett As x Goya) entered the arena crookedly followed by a short, tense halt. The piaffe was passage on the spot with the hindlegs out, the second on the track was better. The half pass left was gorgeous. In the extended walk there could have been more overtrack and stretch over the topline, the collected had good clarity of rhythm but was tense. The canter half passes were very nice, but overall Graves rode the canterwork with her foot on the brake. One extended canter could have been more uphill and in a better 3-beat rhythm, the other was very powerful. The two and one tempi's on the centerline were a highlight. The trot extensions covered much ground, but to nose could have reached more forward. In the final piaffe-fan Verdades had a good rhythm but circles the hindlegs out from under the body.

Graves rode to music from the movie Rudy, which is a coming of age movie of a young soccer star from poor descent. She scored 85.085% and landed a third place.

Danish Cathrine Dufour and her 15-year old Danish bred Atterupgaards Cassidy (by Caprimond x Donnerhall) have premiered new music to be more current and poppy. While the choice for the trot and passage music fits the chestnut excellently, the decision to link every movement with a different tune is not a match made in heaven and gives a very disconnected feel to the freestyle.

The halt at entry nor the end halt were immobile, but the piaffes were nicely on the spot and the extended trots well ridden. Overall the energy was good in the test, but Cassidy lost a bit of steam in a piaffe turn. The trot half pass left was huge and risky, the collected walk short but clear in rhythm. The left double pirouettes were small, in the right ones the horse lost some lift. The extended canter was uphill. In the corner at K Dufour completely lost the canter before the one tempi change line, which then became difficult and short in its execution. In the final passage, Cassidy lost balance and swung in his body. In general the freestyle ride certainly had highlights, but Dufour unusually a bit less accurate in her riding today. The 30 C° heat might have played a role! They scored 84.835% for fourth place.

While Isabell Werth brought the crowds to their feet in the freestyle to music, Danish Cathrine Dufour in fact became the overall Grand champion of the 2018 CDIO Aachen with the most consistent highest scores over three rounds.

The Aachen Grand Championship is decided by totaling the three percentages achieved in the Grand Prix, Special and Freestyle. Dufour achieved 240.818 points in total, with American Kasey Perry-Glass right behind her on 240.793 points. Laura Graves finished third with 239.776 points and Isabell Werth was fourth with 239.269 points. Helen Langehanenberg slotted in fifth overall with 238.630 points.

The Aachen Grand Champion gets a 15,000 euro cash prize from the Liselott Schindling Foundation for the Promotion of Dressage Riding Sport. The money goes in fact to the owner of the highest scoring horse, but in Dufour's case it is herself.