Desperados Not to Compete at 2018 German Championships 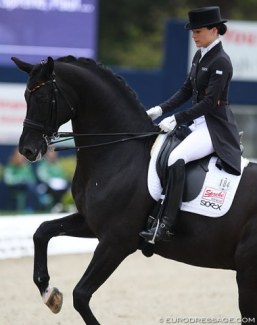 The 2018 German Dressage Championships in Balve, scheduled this weekend 8 - 10 June 2018, are losing some of its shine. After the announcement that Dorothee Schneider's Showtime has been pulled from the roster, now Kristina Sprehe's Desperados has also been withdrawn.

Two of the 2016 German Olympic team horses will now not compete in Balve.

"I'm happy that this injury has nothing to do with the old one. It gives me confidence," Sprehe told Dressursport Deutschland.

Desperados was a member of the German Olympic Team in 2012 and 2016. The stallion then was almost a year off due to an injury. He made his first public appearance at the Gestut Sprehe Stallion Show in Vechta on Sunday 4 February 2018 and first competed again at the 2018 CDI Dortmund, followed by the 2018 CDI Hagen in April.