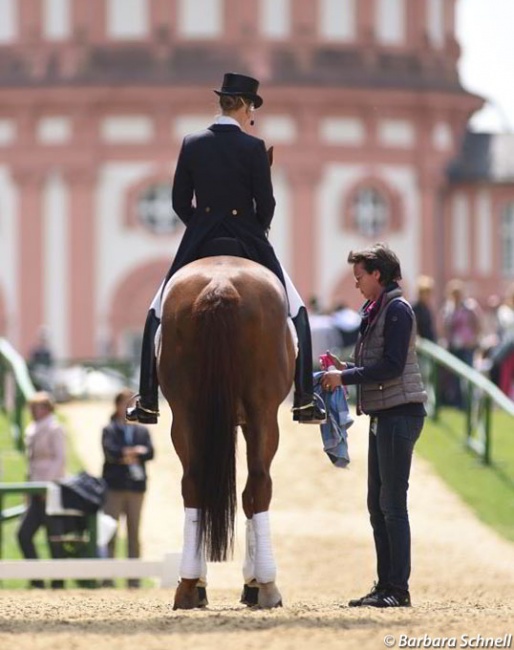 The annual international dressage competition in the Bibrich park in Wiesbaden is without a doubt one of the most beautiful competitions in the world. Set in front of a pink castle, the backdrop cannot get any more picturesque. Five years ago the CDI Wiesbaden was able to field a huge international group of competitors but nowadays Wiesbaden is more and more becoming an all German event.

Dorothee Schneider and Bernd Heicke's 10-year old Hanoverian Faustus (by Falsterbo x Forrest xx) was second in the Grand Prix for Special (72.957%) but claimed the trophy in the Special with a strong 76.000%.

In the Grand Prix for Kur, Lutkemeier and her evergreen D'Agostino (by De Niro x Shogun xx) took highest honour with 73.087% and had Jessica von Bredow-Werndl on Beatrice Burchler Keller's 17-year old Dutch stallion Unee BB (by Gribaldi x Dageraad) behind her with 72.674%.  The kur to music, which is ridden under floodlight,  von Bredow topped the board on 80.075% and D'Agostino was second with 78.225%.