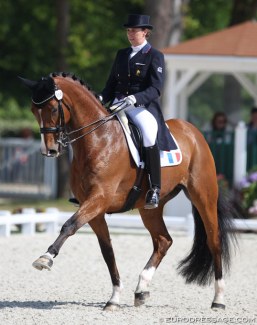 The French Equestrian Federation has announced that Marie Emilie Bretenoux' Grand Prix horse Quartz of Jazz has been officially submitted to the French Elite JO/JEM Squad.

Five horses are part of the JO/JEM squad and in February 2018 the French Federation had already stated that Quartz of Jazz would be the new comer. In their most recent newsletter of 21 May, the FFE has now made it official.

Owned by Marie-Emilie in partnership with her father Jean Bretenoux, Quartz of Jazz is a 14-year old Selle Français gelding by Lawrence out of Honey Jazz (by Urleven Pironniere).

By being submitted to the JO/JEM squad, the French Federation makes an agreement with the owner of the horse to support and collaborate on keeping the horse available for French Dressage towards a particular competitive goal. The federation will support the combination in their training and individual support at shows.

Bretenoux and Quartz of Jazz were first time members of the French team at the 2017 European Championships in Gothenburg. In 2016 they represented France at the inaugural European Under 25 Championships.