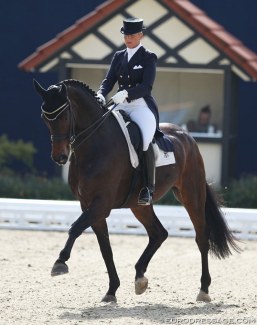 The gelding was first competed by Eva Möller as a 5-year old and by Steffen Frahm as a 6-year old. Frahm took him to the 2016 World Young Horse Championships in Ermelo and finished 11th in the Finals.

Insa Hansen then took the gelding to FEI level. Most recently she showed the horse in the small tour classes at the 2018 CDI Hagen.

"Following much deliberation with the Kasselmann family and owner Elena Knyaginicheva, it has been decided that internationally renowned rider Ingrid Klimke would make a great new partner for the Oldenburg gelding as he makes his way into the top levels of the international sport," said Kasselmann.

“Bluetooth is an exceptional horse with unbelievable possibility. I look forward to working closely with Ingrid and following their success," said his former rider Insa Hansen.