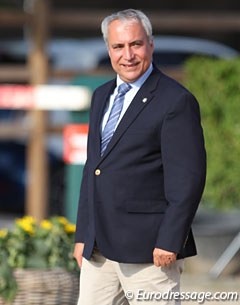 Ingmar De Vos, who was elected as FEI President in 2014, is the sole candidate for this year’s Presidential election, which takes place at the FEI General Assembly in Bahrain’s capital Manama on 20 November 2018. Beatriz Ferrer-Salat and Patrik Kittel are aiming for the one vacant FEI Dressage Riders Representative seat.

A total of 52 athletes from 26 countries on five continents will also be standing for election as Athlete Representatives for the FEI’s eight Committees for the Olympic sports of Jumping, Dressage, Eventing, Paralympic sport of Para-Dressage, Driving, Endurance, Reining and .

“I am honoured to have the opportunity to stand for re-election”, Ingmar De Vos said. “While I would have expected other candidates, I take the fact that I am unopposed as recognition of all the important work that has been done by the FEI over the last four years.

“This could not have been achieved without the wonderful team at FEI Headquarters under the leadership of our Secretary General Sabrina Ibáñez, and the support of the National Federations and our community, for which I am extremely grateful.”

“We have a record number of athletes wanting to play a role in helping to shape the future direction of equestrian sport, and these include Olympic and Paralympic medalists and current world champions.

“Equestrian sport is unique in the fact that our athletes have such long competitive careers, and many also want to give back to the sport and forge the right future for the next generations of athletes. These are voluntary positions for our athletes, who already spend every waking moment in this sport, so we fully appreciate just how strong a message this is sending to our global community.”

See which athletes are running as Athlete Representatives here.

FEI President Ingmar de Vos, who was elected as an IOC Member in 2017, will stand unopposed following the expiry of the deadline for receipt of candidacies at midnight on 1 May 2018.

It is the first time since 2002 that there has been an uncontested election for the FEI’s top role. The FEI Presidential term is four years, with the possibility of re-election for up to three consecutive terms for a maximum term of 12 years in office.

The Athlete Representative online voting process will open on 29 July. Athletes over 18, who have competed in one of the last two senior FEI World Championships, Olympic Games or Paralympic Games can vote for an athlete in the same sport as themselves and have until the last day of the FEI World Equestrian Games™ (23 September) to do so.

To be eligible as a candidate, athletes must have a clean anti-doping record since April 2010 when the new FEI anti-doping system came into effect. The elected Athlete Representatives will be announced on 24 September.

For Dressage Spanish Beatriz Ferrer-Salat and Swedish Patrik Kittel are in the running for a seat as FEI Dressage Riders' Representative, taking over from Anna Paprocka-Campanella whose term is up.

On 15 June, the FEI will announce here the remaining 16 positions that will be elected and appointed during the FEI General Assembly 2018. These will include Members of the FEI Bureau - which is responsible for the general direction of the FEI - FEI Group and Committee Chairs, and Standing Committee Members.