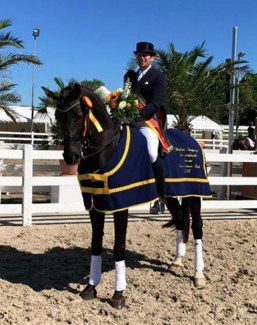 The Krefeld based Grand Prix rider Heiner Schiergen renewed his title of German Professional Dressage Rider Champion by winning the 2018 Nationals held in Unna-Massen on 4 - 6 May 2018.

The German Professional Dressage Riders Championships consists of three rounds: the Grand Prix and the Special after which the three best scoring riders move to a Finals with horse change and ride a short Grand Prix test on each other's horses.

Heiner Schiergen saddled the 13-year old KWPN bred and Belgian owned Aaron (by Florencio) for the Championship and impressively captured his fourth, consecutive title and fifth in his career.  He won the Grand Prix with 70.667%, the Special with 70.686% and then in the horse change finals he was supreme on two of the three horses. He earned the highest score on his own Aaron, as well as on Bredermeier's Download. With Nabben's Peppo he rode the second highest score.

Tobias Nabben scored silver after placing second in the horse change finals. Nabben and the 17-year old Oldenburg gelding Peppo (by Pik Noir x Noble Roi xx) were also second in the Grand Prix (69.600%) and fourth in the Special (68.693%).

Ants Bredemeier got bronze in the horse change finals. She and her 11-year old Oldenburg gelding Download (by Don Frederico x Sunny Boy) first finished third in the Grand Prix (68.667%) and was third in the Special (69.575%).

Only 10 combinations contested this year's professional championships, while there were 16 combinations in 2017 and in 2016.