Kenzo and Kissinger Drop Out of 2018 KWPN Spring Stallion Testing 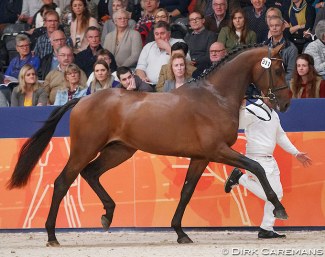 The young colts Kenzo and Kissinger have dropped out of the 2018 KWPN Spring Stallion Performance Testing which is now at its half-way point after 25 days.

The KWPN Stallion Licensing Committee held a mid-way assessment moment on 18 April of the dressage stallions participating in the spring 50-day testing, which will conclude on 26 May 2018.

Two stallions have ended their testing: the 3-year old Kissinger  (by Arlando x Special D - previously named Kensington) has dropped out, while Kenzo (by Ferguson x Vivaldi) has been asked to return for the autumn testing.

The KWPN society has further removed three stallions from the list of the participants: Kameraad  (by Eye Catcher x Rousseau), Karachi  (by Jazz x Totilas) , and Kalisto KL (by Expression x San Amour)

Still in the running are: