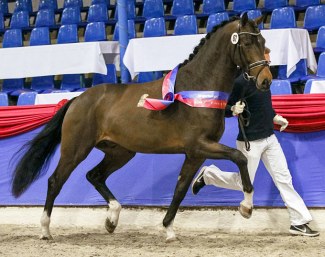 The Danish owned Zac Efron was named champion of the 2018 Oldenburg Saddle Licensing, which took place in Vechta, Germany, on 5  - 7 April 2018.

For the 7th time, the Oldenburg society organized a Saddle Licensing in spring. At the 2018 edition 14 stallions participated of the 16 that were initially selected. At the licensing itself 3 dropped out and 6 were licensed. Three were named premium stallion.

The Reserve Champion's title went to the 3-year old Le Roy (by Apache x Fürstenball x Royal Hit), bred by Winie Zornig-Sylvesteren in Denmark and owned by Petra Schöning from Könnern in Saxony-Anhalt. He was purchased by Zornig as foal at the 2015 Oldenburg Elite Foal Auction in Vechta.

The third ranked premium stallion was Dieu de l'Amour, who is by De Niro out of internationally competed small tour mare Soiree d'Amour (by San Amour I x Latimer). This colt is bred and owned by Birgit Kalvelage from Bremen. Under Kira Wulferding dam Soiree d’Amour OLD was the Oldenburg Young Horse Champion in Rastede and the Bundeschampion in Warendorf as a 3-year old.

The top ranked stallions will be auctioned in the 88th Oldenburg Spring Elite Auction on 7 April 2018.