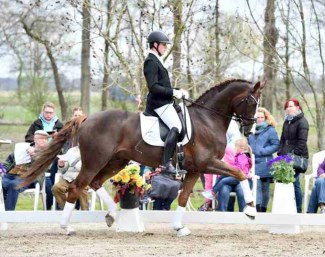 The 8-year old Hanoverian licensed stallion Ben Kingsley has been sold to the 14-year old German rider Isabelle Dülffer, who is a member of the Hessian's Children squad.

Bred by Ewald and Elke Ahrens, the chestnut Ben Kingsley is by Benetton Dream out of La-Rouge (by Londonderry x Dream of Glory x Acapulco).

Ben Kingsley was owned by the Dillenburg state stud but stood at Jens Meyer's station in Dorum, Germany. He was first licensed at the 2012 Hanoverian Stallion Licensing and did his 30-day suitability test in Zweibrucken in 2013, scoring 8.40 in total with 8.44 for dressage and 7.95 for show jumping. A year later he did the 70-day performance test in Marbach and scored 8.36 in total with 8.15 for dressage and 8.11 for jumping. The stallion has only one offspring registered for sport with the German Equestrian Federation.

Ben Kingsley was first competed by Corinna Kühler in 2014 at local events. In 2015 Steffen Frahm took over and qualified him for the 2015 Bundeschampionate, but the pair dropped out of the consolation finals. In 2016 it was Rieke Springer-Börger as well as Philipp Paradiso in the saddle. Paradiso took the horse to small tour level in 2017 and Helen Langehanenberg showed him once in January 2018 in Ankum at S-level.

Ben Kingsley has now been sold to Dülffer, who trains with Langehanenberg, but lives in Niestetal near Kassel, Germany. Isabelle has been competing at A and M-level in Germany with Dein Prinz D (by Damsey x Davignon) and Finale (by Fidertanz x Donnerhall).