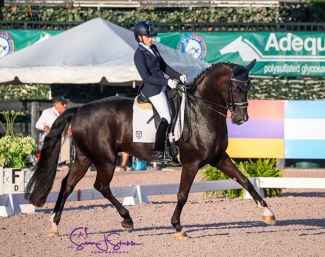 The sixth annual Florida International Youth Dressage Championships were the highlight of competition on the final day of week 10, Sunday, March 18, of the Global Dressage Festival in Wellington, Florida.

The Championships featured competition for riders in the Under-25, Young Rider, Junior, Children and Pony divisions, offering them a chance to compete on the big stage and showcase their talent at one of the world’s largest and most high-profile dressage competitions.

Whereas the normal Wellington CDI's had a very limited number of youth riders competing, this special weekend dedicated to the kids brought them out in big numbers: 4 pony riders, 1 children's combination, 7 junior riders, 17 young riders and 10 under 25 riders.

There were five youth division winners, with 16-year-old Natalia Bacariza from Spain winning the overall trophy for the highest average score. She beat six other Junior riders, winning all three classes with over 71% on the Yeguada De Ymas’s 11-year-old Don Crusador gelding, Dhannie — former ride of her trainer Juan Matute Guimon and his kür gold medal-winning 2015 Junior European Championships partner.

“I am super happy about winning; I’ve wanted this for a very long time and I’m really happy that we finally did it,” said Bacariza, who is from Madrid and is the daughter of Cristina Danguillecourt and Javier Bacariza, owners of the Yeguada de Ymas. “I’ve been riding Dhannie for three months. He was ridden by Juan before, so he already knows his job, but you still have to ride him and not make any mistakes. Our best test was the individual [71.716%] and I’m very excited about our journey together.

“Our highlights were probably the changes and the trot work. We’re finished with the Wellington season now and then we’re going to be competing in Europe — first in Spain then Germany and maybe France,” added the teenager, who has big career aspirations. “I hope to improve my riding and continue my career in dressage and hopefully become another big champion.”

It was another win for Spain in the Under-25 division, with Rodrigo Encinas Fuentes and Van The Man leading the field of 10 entrants. The horse is owned by Cesar Parra, who rode the now 16-year-old gelding by Obelisk at grand prix at AGDF in 2013, 2014 and 2015 before handing the reins over to his young pupil.

Rodrigo Encinas Fuentes, 22, attracts praise for his mature riding en route to winning the Under-25 division of the Florida International Youth Dressage Championships aboard Cesar Parra’s Van The Man. Fuentes won only one of the three young rider tests, with Natalie Pai (USA) winning the other two on Unlimited, but his average score of 68.094% edged out Pai’s 67.746%.

“I was very happy with the horse; I felt he was truly with me and gave 100%,” said the 22-year-old Madrid native, who was competing at AGDF for the first time. “There are of course still some things I could improve, as always, but I’m truly happy with his attitude and he’s getting better test after test.

“This result means a lot. Just to compete at this level is great, but to win is better! I work really hard to get the opportunities to accomplish my goals, I’m really far from home and I sacrificed a lot,” added Fuentes, who left home at 18 looking for further riding opportunities in Europe before meeting Juan Matute, who invited him to the USA. “He really helped me, and the family opened the doors of their house for me. I learned a lot and its thanks to them, and also to Dr. Cesar Parra, who has treated me like his own son. He’s taught me not just about horses, but also how to be a better man.”

It was Canada’s Beatrice Boucher who came out on top of the 17 competitors in the Young Rider division. Riding Gilles Bergeron’s 15-year-old Del Piero gelding Delfiano, she averaged 69.415% across the three tests.

Beatrice Boucher (CAN) and Delfiano cement their partnership by winning the hotly-contested Young Rider division with an average score of 69.415%.

“The horse belongs to Camille Bergeron’s father and I wasn’t expecting to compete him at all, but I am so happy we can now do the young rider championships,” said the 20-year-old from Quebec, who picked up the ride when Camille no longer had enough time for Delfiano as well as her other horses. “I’ve only been riding him for a year but he’s such a puppy dog and always in your pocket — he’s so nice to be around. He’s never negative, he’s always your team mate and he’s so consistent. He’s a real pleasure and he gives his best all the time.”

The children's winner was another to hail from Canada. Lily-Rose Lemaire, 14, rode the former broodmare World Lady, 18, to the Children’s title.

“My ride was very good this weekend and I’m so happy. My horse was with me and I think it’s my best ride with her,” said Lemaire, who only took up riding three years ago and began the partnership with World Lady six months ago. “This was my first CDI in Wellington as I had only done national shows before. This is my first season in Wellington and it is a beautiful place.”

The youngest division winner came in the form of 13-year-old Tori Belles from Pennsylvania riding PJ Rizvi’s pony Prince Z to an average score of 67.498%.

“I’ve been riding him for a month,” she said. “He’s been to the European Championships [he was a Dutch team medal winner under Febe van Zwambagt in 2011] and it’s a privilege from PJ Rizvi to show and compete him. He gives you the best feeling ever and supports you — even if you have a little mistake he tries to support you and help you out. I’m hoping to carry on showing him and also go to Lamplight festival of champions.”

Sponsor Terri Kane of Diamante Farms, who sponsors the under-25 division throughout GDF and supports FIYDC, said: “This is the future of dressage and if these kids aren’t out there competing, then our sport will die. It’s very important for people in the dressage community to show that we support them and that we care.”

Of the entries from six different nations, she added: “It’s exciting. Just like for our national and international athletes, it’s very important for these athletes to compete against other countries to make themselves better. We had a huge junior group this year, so hopefully they continue riding and go into the u-25 and hopefully a lot of these riders will go on to become professionals and continue to compete after they age out of the u-25.”