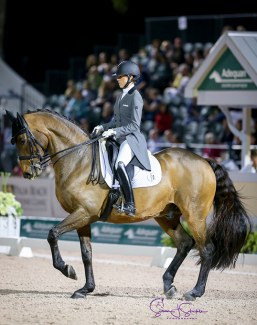 Olivia LaGoy-Weltz (USA) and Lonoir chalked up their fifth win from six starts at the 2018 Global Dressage Festival (AGDF) by taking the Grand Prix Freestyle 4* on Friday 16 March 2018. Their resounding score of 76.6% in week 10 of GDF in Wellington, Florida, was a personal best for the pair, whose previous high freestyle score was 74.425%, achieved in Aachen in July 2017.

“I was really happy with him, especially as he was epically airborne last time we were in this setting, so I’m thrilled we kept our feet on the ground,” said LaGoy-Weltz of her own 14-year-old Danish warmblood gelding by Le Noir. “When he’s waiting for me and on the same page, it’s a pretty cool feeling and there’s a lot available there — even more than we’re showing now.

“We hadn’t used it a whole lot, so I asked Terri [Gallo] if we could grow it. I like the music — it’s called ‘Ain’t Misbehaving’, which is somewhat fitting. Though we are working on something new as he’s a much ‘bigger’ horse now, it seemed to work for tonight, so we’re not in a huge hurry,” she added. “This one is not overly complicated as it was designed as a starter one, so we’ll have more challenging stuff in the next one. And we’ll highlight the flow and power that he’s so good at.”

“He’s matured a lot in the last three months,” said Page, who rode to music from the movie Amistad that she used with her former grand prix horse Wild One. “We had a super rough start as he’s very sensitive with wind, but at every show this season he’s developed more.

“This was only ever starter music, but I knew one day I’d have another horse who it would suit, and Marlene Whitaker is a flipping genius and she reworked the music to suit Woodstock,” said Page.

The test is a technically demanding one, which Page designed two years ago with the intention of maximizing the difficulty.

“It’s full of difficult things in difficult sequences; the idea was to layer complicated sequences one after the other. I’m actually comfortable riding it now, and Woodstock is a horse with a lot of alacrity and sensitivity, though he can be a scallywag. It’s nice riding the freestyle because he never anticipates — because I rarely practice.”

“Last time we had a few miscommunications,” said Matute, who was riding to music put together by his mother and a floorplan he designed with his double Olympian father. “But today he felt rather good, the piaffe felt better and I was pleased with the overall performance. My horse perhaps doesn’t have the highest quality of gaits, but we know how to fight with what we’ve got — and dressage is about trying to reach the full potential with what you’ve got.”

Judge Janet Foy, who was presiding from C, said: “Having judged these guys over the season, there has been so much improvement. It’s really exciting to be able to sit there as judges and give eights and nines. All three of these top tests were so clear and focused, so we could really enjoy watching and judging.”

Canada’s long-time, much loved combination of Jacqueline Brooks and D Niro bowed out of competition at GDF, taking their final salute at the venue which has been so much part of the pair’s journey together. They finished sixth with 70.6%, and the 19-year-old grey gelding — fondly known as Goose — will now return to Canada. Familiar faces on the AGDF circuit since 2012, the crowd showed their appreciation for this popular duo with a standing ovation.

Marienau Takes Out Second Victory of the Weekend

Beatrice ‘Trixi’ Marienau secured back-to-back wins, having also triumphed in the grand prix. She also took the winner’s sash in the Grand Prix Freestyle 3*. Riding the equal oldest horse in the class, 19-year-old Gribaldi gelding Stefano 8, she posted 72.1% — the only plus-70% of the class.

The German-born 47-year-old American, who is a cousin to British Olympian Laura Bechtolsheimer, is an unlikely dressage winner, having formerly showjumped, then become a cowgirl on a ranch, before finally turning to dressage — despite what she terms “ring-phobia” that requires her to meditate before each test.

Their double win in week 10 was a first for Marienau, who has only two previous wins in the five years they have been competing together at international grand prix. Their winning freestyle score is their second highest ever, and their best for two years.

“He’s a firecracker, and I appreciate every day I have with him,” said Marienau, who bought ‘Fino’ in 2012. “I feel his age sometimes, so in the training we really work a lot on the suppleness so he can come through with the beautiful exercises that he knows how to do. Tonight I asked him to dance for me, so he did.

“He was already a trained grand prix horse but in the beginning the switch from a man to a woman rider was difficult, so we took our time and have been working with Lilo Fore ever since. I only rode my first grand prix in 2011, so Fino has done so much for me, including going to the Festival of Champions and onto my first Nations Cup team, which was a big dream of mine,” she added.

Tina Konyot (USA) and PSD Partners LLC’s Desperados gelding Diamantino II led the huge Prix St Georges CDI1* class, which was sponsored by Horseware Ireland. Of the 26 entries, the top three all broached 70%, with Konyot posting 70.343 — bolstered by her high score of 73.088% from the judge at C, Janet Foy.

This was the horse’s second win in his nine small tour starts, having kicked off his CDI career in January of this year. This was the first time he had scored north of 70%. American Lauren Asher (Honnerups Event) and Germany’s Michael Klimke (Harmony’s Diabolo) tied for second  place, posting 70.098%.

Shelly Francis (USA) and Danilo went one better than in the grand prix to clinch the Grand Prix Special 4* on Saturday 17 March 2018. She and Danilo scored 73.979%, a new personal best in this test for the pair, who are ranked 42nd in the world. The 2018 Wellington show circuit nears its close on 31 March 2018.

“When you’re really riding and pushing a bit and trying to make everything perfect, you kind of feel it’s not your best ride because you’re sweating more than the horse,” said Francis, who is based in Loxahatchee, Florida, and was contending with a pair of stiff new riding boots. “But he did feel good; I just have to relax a little and trust him. We had a little mistake at C when he thought halt and rein-back, like in the grand prix, when I was trying to make passage. Other than that, he felt straight up.”

“Patricia was riding him and doing a nice job, but then she suggested I show him a bit, which was her mistake, because now he’s mine!” laughed Francis. “He kept getting better and better, though I did have to take it a little slow. He has a funny little edge in there that can come alive at the snap of a finger, so I’ve been trying to figure out how I can use a bit of that edge without getting too much. It’s really starting to come together this year. He used to get nervous in the ring about being by himself, but now he’s starting to enjoy it and he feels happier.”

Francis partially attributes Danilo’s improved performances to his well-rounded regime, which includes a broad variety of work, such as hacking and playing games.

“I get them fit enough and then I don’t work them all the time, because I feel they get mentally bored,” added Francis, who does not have a regular trainer. “I train with myself mostly, which works pretty good so far. Once in a while I have to kick myself around, but I’m a visual learner and I watch all the top riders. I’m a bit of an odd biscuit that way, but I did a lot of training in past years with great people like Johann Hinnemann, and now I have my own methods of training. I’m 59 — not 20 any more — so I train my horses from all the things I’ve learned.”

On April 1, Francis will make the journey over to Europe with her two top horses, Danilo and Doktor. She will be based in Warendorf, Germany for the summer — her sixth consecutive summer in Europe.

“I have good friends there, I love that little town and area, and I get my own nice little apartment so I can do all my own cooking and not gain weight, like when living in hotels,” she added. “This year, Danilo gets to do the World Cup Final in Paris, which I’m really excited about. I’ve never been to Paris, so I’ll get perfume, croissants, brie, pate and some really good wine.”

Winner of the grand prix, Canada’s Brittany Fraser (All In) had to settle for second in the Special, while her fellow Canadian Jill Irving filled third on Degas 12, who is by De Niro, the same sire as Danilo.

Megan Lane (CAN) finished fifth in the four-star special on San D’Or, but sat atop the leaderboard in the Grand Prix Special CDI3* riding her own 17-year-old Caravella to 71.617%.

It was the first win in a year for the KWPN Contango x Riverman mare, who was bred by Jill Irving. Caravella and Lane have progressed up the ranks together, starting out at under-25 grand prix in 2012, and encompassing the 2015 Pan American Games and the Rio Olympics in their extensive career accolades.

Belinda Trussell (CAN) was second on Tattoo 15, her own 15-year-old Westfalian gelding by Tuareg, with 70.34%. Third was home rider Anna Marek on Diane Morrison’s Dee Clair who, at 10 years old, was the equal youngest horse in the class. Their 69.34% was the Sir Sinclair mare’s best score sine starting international grand prix in early 2017.