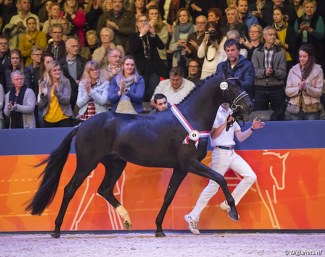 The black Kremlin MD (by Governor x Rousseau) has been named the champion of the 2018 KWPN Stallion Licensing in 's Hertogenbosch, The Netherlands, on Saturday 3 February 2018.

The champion's title went to Kremlin MD, who is sired by Governor out of star mare Faresia (by Rousseau). Bred by Marjo Dinnissen and owned by Louis and Gabrielle Röst, Kremlin MD impressed with his beauty, movement and self carriage according to the licensing committee

Kadans (by Franklin out of Ciolita II (by Jazz) was named reserve licensing champion. Kadans is bred by G. Rijper and owned by Brood farm 't Centrum.

Kostolany B (by Toto Jr x Jazz) finished third in the premium ring. He is bred by J. van Boven and owned by Rob van Puijenbroek.

These private sales of course resulted in mediocre prices achieved at the official KWPN Select Sale auction, which followed the licensing. With the majority of the interesting stallions already sold in private deals, KWPN could not even break the 100,000 euro barrier!

The top selling stallion at the KWPN Select Sale was Kibo (by Totilas x Jazz). Broere stud, which recently came into some money selling their Grand Prix horse Westpoint through Andreas Helgstrand, purchased Kibo for 75,000 euro.

Klasie (by El Capone x Krack C) sold for 60,000 euro to the U.S.A., but will stay in training at stable Laarakkers in The Netherlands.

The non licensed Krack E (by Ferdeaux) was the most expensive not approved stallion. He sold for 46,000 euro.

The average price for a stallion was almost 35,000 euro.