Flexions and Flexibility: Part I 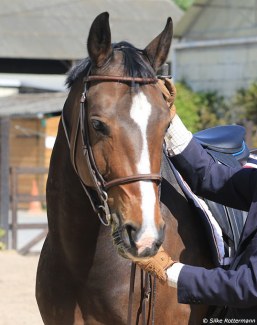 Flexions develop the suppleness of the horse’s body so he can harmonize with the rider’s aids: follow the hand without leaning on it, yield to the legs without leaning on them. Another reason to work on flexions is to remove the “kinks” in the spine (points of tension that prevent its harmonious curvatures, as much lateral as longitudinal). When suppled by adequate work with flexions, the horse can do his job without any jarring of his muscular-skeletal machine or inverting his topline in any phase of his gait. All of this work “dissolves” the different points of resistance and translates in the horse becoming lighter to the aids. While all this sounds wonderful in theory, the challenge is that it takes observation, dedication and correct application of the techniques to get our horses ultimately to this harmonious place. So let’s take a closer look at the “hows and whys” of using flexions to develop your horse’s suppleness and self-carriage.

Balance and Symmetries of Young Horses

When horses are born, they are extremely flexible. As their weight and height increases, they become progressively stronger and stiffer to deal with the challenges of gravity. Balance is the fundamental issue the horse has to deal with because a fall brings the risk of becoming vic- tim to a predator, or could result in a fracture that would compromise his future ability to escape. Balance, maintained and developed by “proprioception” (the awareness of the body position in space), is a necessity for wellbeing and survival and has a surprising relationship to cognition. No human or animal can function mentally when out of balance. Conversely, all motion adjustments that improve balance are “intrinsic rewards” that are automatically remembered and appreciated by the horse. In Scott McCredie’s book Balance, he writes: “It has been argued that balance may prove to be the most primordial, life- sustaining, essential—of all the senses.’’

As they age, horses become more protective of themselves and resistant to external influence, responding in part to the social environment they grow in and its challenges. This behavior translates into a greater tendency to stiffen against contact and perceived threats from others. When horses reach the age of three or four, physical and sexual maturities are fully developed. Natural asymmetry, due to the uneven placement of the  internal organs during the embryonic development, becomes more evident. Muscle memory, either genetic or acquired (I’ll call it “muscle software”), now defines the form and energy of movement and, as “form follows function,” shapes and strengthens the fascia. This white shiny skin that anybody who has ever cut a chicken leg could observe (I’ll call it “muscle hardware”) encases all the muscles. It gives them their shape and also influences the form and range of their motion: “form guides function.”

The neuro-muscular system is interactive between brain “commands,” transmission through nerves, fascia structural tension and muscle activity. The tendency of the musculature is to always respond to problems of balance by restricting itself through more or less permanent contractions that are designed to prevent potential harm to the skeleton. This progressive biomechanical restriction de- fines body posture and locomotion. Balancing reflexes by the horse restricts his  movement and forces him to resist our demands for more movement. Therefore, barring exceptional horses, the better the balance, the more difficult it is for the rider to create impulsion. Unless the body is freed from those self-imposed mechanical limitations, its ability to move freely will greatly diminish over time. It is noticeable that untrained horses lose flexibility and range of motion over time, while well-trained horses move better and better with age.

When we start training the horse, our eventual goal is to perform a series of symmetrical exercises in rhythmical and expressive gaits, controlled by light and even  aids. This only becomes possible by helping the horse to regain his original flexibility and expand it to achieve as much symmetry as possible, which is when flexion work is beneficial. The body is shaped in a series of permanent spinal deviations that counteract each other. We call it “crookedness.” In the majority of cases, the dorsal spine bends left (concave side), lowering the right side of his back, making the horse heavier on his right shoulder (harder to bend the neck to the right) and the poll bends right (harder to bend the poll to the left). Practically speaking, the horse does not need the same flexion work on both sides because of his asymmetrical flexibility. For instance, a horse that loads his right shoulder needs the base of the neck to be pushed left (low flexion) so he can flex right while loading his left shoulder more, until weight distribution equals out. The same horse may also push his third, second and first vertebrae (upper neck and poll) to the right and need to relax this area by curving all three to the right without tipping his poll left. This seems to be overly detailed but, without this preparation, the right half-passes for instance will always be labored for the rider and uncomfortable for the horse.

Basic Flexion Techniques for the Head and Neck

These exercises must release the tension on the concave side of any lateral curve. This is when myofascial massage demonstrates its value: releasing the fascia by a steady, sliding pressure of the fingers produces the relaxation that allows lateral flexing. Flexions of the head and neck have been traditionally demanded by actions of the trainer on the bits of a double bridle, but they can be first obtained by adequate pressure of the fingers. Proper flexions must always end in complete relaxation: the horse is put in the desired position, held by a “fixed hand,” given the time to relax on it, chew, swallow and keep this flexion a couple of seconds after he is released. The fixed hand (Baucher concept) does not pull and only gives after the horse has released his own tension by modifying his posture through relaxation. As an example, the lateral poll flexion to the right can be obtained by pushing the poll in that direction with a finger applied close to the left TMJ, while a finger placed on the right side of the nose keeps his head vertical and prevents tipping. There is a technique called “resetting” that consists of gently rock- ing the head from side to side very lightly. It releases the tension in the poll and most horses end up stretch- ing into that position and even seek to take the flexion themselves.