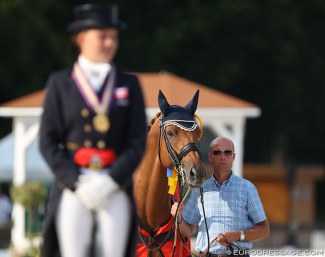 Denmark's number one Grand Prix rider Cathrine Dufour and her trainer of 15 years, Rune Willum, have decided to part ways.

"We’ve decided to take a break from working together," Dufour told Eurodressage. "We are still very good friends and it’s not a closed chapter with Rune and I."

Rune concurred: "It has been a super and nice long journey. We learnt a lot and i think we all did a good job. We are still very good friends and will maybe work together again one day."

The 26-year old Dufour began training with Rune when she was an 11-year old. Willum guided his student from pony level on Moonlight to junior level on Aithon and Cadillac. He then coached her on Atterupgaards Cassidy to the 2012 and 2013 European Young Riders Champion's title, followed by a successful Under 25 career and then to senior Grand Prix level. Cathrine and Cassidy finished 13th in the Kur at the 2016 Olympic Games and won team silver and double individual bronze at the 2017 European Championships in Gothenburg.

Cathrine has already worked with Kyra Kyrklund on an occasional basis and she hopes to extend that collaboration.

"I’m dreaming of continuing with Kyra as much as possible since she’s helped us a lot already," said Cathrine. "And then Nathalie (zu Sayn-Wittgenstein, Danish team trainer) will help me from now on."