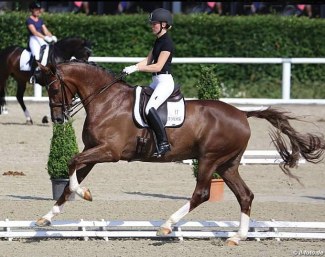 Ernesto is bred by Hedda's father Walter Droege and is a 9-year old Westfalian gelding by Ehrenwort out of Franziska (by Florestan x Upan la Jarthe AA x Der Clou).

The tall liver chestnut gelding was first competed as a 4-year old by Anna Thiemann, but half a year later Claudia Rüscher took over and presented the then 5-year old at A-level.

Ruscher qualified Ernesto for the 2014 Bundeschampionate and landed 10th place in the 5-year old finals.

Hedda began riding Ernesto when he was 6 and only did one show in 2015. In 2016 he moved up to S-level and was shown at several national events. They tried qualifiying for Germany for the 2016 World Young Horse Championships in Ermelo, but were not picekd.

In July 2017 Ernesto did his first Intermediaire II and Short Grand Prix at the CDN Rastede as an 8-year old. They also participated in the Louisdor cup qualifier in Schenefeld in August, where they were 6th in the Short Grand Prix. It was their last show together.

Ernesto has now been sold to Helgstrand and Andreas is riding the horse himself instead of one of his assistant trainers.

"I bought it myself and I am actually riding it," Andreas told Eurodressage. "I am really enjoy to ride this world class horse myself. Of course he is for sale like all our horses, but he is really special I think."