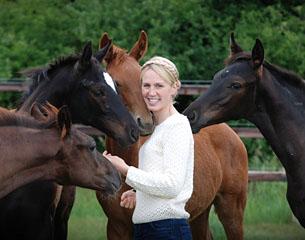 Grand Prix rider Hedda Droege is one of Germany's young dressage professionals who manages her own breeding and training facility at Gut Dalmer estate for the past five years. The 30-year old business economist has taken over the management of Gut Dalmer from her father Walter and is running the Lippetal based yard with great passion. Droege focuses on breeding and training of young dressage horses for the high performance level.

"Good horses only result from highest ambition and best quality," said Hedda about her breeding philosophy. This is the basis for successful dressage horse breeding at Gut Dalmer, which is a professional equestrian facility, streamlined to the needs of foals and brood mares. The newly built stables, which are very well equipped with light and airy free stalls with spacious paddocks in front, form the core of the estate. The yard is surrounded by pastures where approximately twenty carefully selected broodmares live in herds with their foals.

Only mares which meet the highest breeding standards, i.e which became premium mare and have completed a very good mare performance test, will be broodmare at Gut Dalmer. Future broodmares also take part in young horse tests to assess their performance level and rideability. Some of them continue as sport horses for some time, before they may get foals. 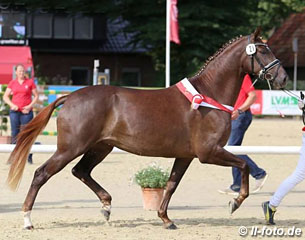 The list of prize awarded premium mares, graded stallions and successful sport horses bred by the Droege family prove that concept. During the last five years at least one participant from the Gut Dalmer breeding program took part in the end ring of the Westphalian Elite Broodmare Show: in 2016 Ballerina (champion mare, now in foal to Champagner), in 2015 Brentwood (by Belarus x Florestan I) and in 2014 Funkenmariechen (by Fürst Wilhelm x Brentano II). The latter is now a broodmare. In 2013 Belrose (by Belissimo M) became end ring mare, her dam Fleur Rubin (by Florestan I x Rubinstein) is one of the foundation mares  at Gut Dalmer. Today Belrose is a successful dressage horse with a special talent for piaffe and passage. She has been sold to the USA. In 2012 Disco Queen (by De Kooning x Fidermark) was in the end ring.

For 2017 already three mares are qualified for the Westphalian elite broodmare show. All three belong to the first crop of the Westphalian sire Escolar: Espe (dam sire Dimaggio) was winner of the broodmare show in Emsbüren. Ennna Lux (dam sire Laurentianer) and Estelle (dam sire Florestan) presented themselves outstandingly as well. At the Hannoverian mare show both mares were also awarded the Hanoverian premium title.

Each year's crop of young colts leave the yard as weanlings and grow up at the farm of Heinrich Ramsbrock, the renowned German stallion raiser and a friend of the family. Several young stallions out of the Droege breeding programme have already achieved their approval.

Hedda trains all homebred dressage horses from the bottom up assisted by professional certified dressage rider Claudia Rüscher. In her training of the advanced competition horses she is coached by accomplished trainer Johannes Augustin. All Gut Dalmer young talents are individually fostered, gently trained and selectively introduced to shows. For Hedda this is the only way to properly offer dressage horses, from novice to advanced level, to an international audience. A select number of the horse are offered for sale, directly from the breeder with the horses' full history known.

As a young breeder, Droege is very proud of this system of nature and nurture as she supervises each individual horse from birth to their career in sport.

“I do not measure my success in ribbons, but in breeding progress, where I am heading to. Our aim is to produce highly rideable and willing horses for international dressage sport based on stallions that have proven themselves in competition and out of well-bred dam lines," she explained. 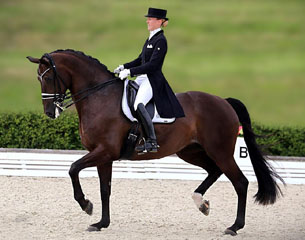 Hedda and her family have proven that the Gut Dalmer breeding projects works, not only at breed shows and stallion licensings, but also in sport. As a rider and trainer, Hedda has successfully competed a string of homebred horses. The Hanoverian mare Florina (by Fürst Romancier x Donnerhall) competed at the World Young Horse Championships and has now been sold to British Olympian Fiona Bigwood. The 2009 born mare Dreamgirl (by De-Kooning x Florestan) was introduced to advanced level and became victorious. Today she is based and further trained at Bolette Wandl's Château de Fontaine in France. Donatella, an other daughter by De Kooning x Rubinstein I, has been victorious up to Grand Prix and placed second in the 2014 Louisdor Cup Finals. Its winner was last year’s Olympic mare Weihegold under Isabell Werth.

The 8-year old Ernesto (by Ehrenwort x Florestan I) is on the verge of hitting Grand Prix and has already been successful with Hedda up to Intermedieaire I. “I’m having high hopes of Ernesto. He has a considerable potential in making the final leap to Grand Prix in the next few years," she added. And that is what Hedda stands for: breeding, training and riding first class dressage horses from one single source!