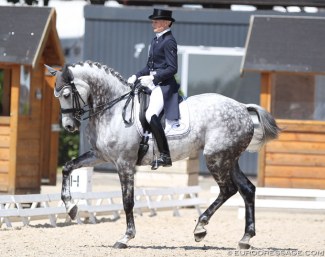 Brand new Swedish Grand Prix A-team rider Anna Blomgren-Rogers and her Australian husband Will have moved from The Netherlands to a new base in Germany. The couple relocated from Nijmeghen to Dulmen in September 2017.

"We wanted to have the opportunity to rent our 'own' place again and have a bit more space & nature which Germany provides," Blomgren told Eurodressage. Anna and Will are now at Eulenhof, which Kittel and his wife Lyndal Oatley recently purchased.

The 37-year old Blomgren has worked for Blue Hors stud and Andreas Helgstrand before she moved to Holland to work at the same yard as Australians Tristan Tucker and Will Rogers. Rogers and Blomgren then went independent and

Now based in Germany, Blomgren has also begun training with fellow team mate Patrik Kittel. "I’m very happy for for it," added Anna, who was previously trained by Anne van Olst.

Aboard Pernille Rugaard's 10-year old Danish warmblood mare Torveslettens Quattro (by Quaterback x Carano), Blomgren made her international Grand Prix debut in 2017. The pair competed at the CDi's in Compiegne, Roosendaal, Deauville and Geneva. At the latter show they won the Grand Prix Special with 72.137 which led to Blomgren's promotion to the Swedish A-team.

"I havn’t done the competition plan yet for Quattro," said Anna about her 2018 show schedule. "We take January and maybe February to train and then we will try for a spot for Tryon."

Related Links
Swedish Dressage Squads for 2018 Announced
New Kids on the Block Shine in 2017 CDIO Compiegne 3* Grand Prix
Fiderhit OLD and Simply Nymphenburg Ready to Shine at Grand Prix
Severo Jurado Lopez to Denmark, Anna Blomgren to The Netherlands
Will Rogers: "With Our Horses on Equine 74 Gastric They Look, Feel, and Perform Better"