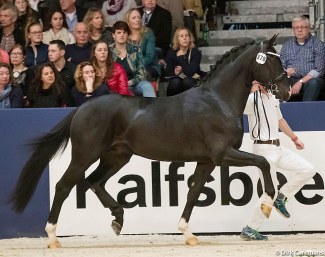 The 3-year old KWPN licensed stallion Jay Destino (by Danciano x Diamont Hit) has been sold to the Swiss based Dutch Sonnenberg couple. Imke Schellekens-Bartels' former sponsor has acquired the black stallion as her own ride.

Jay Destino is an Oldenburg registered stallion bred by Paul Schockemohle. He was originally named Destino, but renamed Jay Destino when he got his breeding licence for the KWPN society.

Sonnenberg has now bought Jay Destino after he was tried out by her with Imke Schellekens-Bartels by her side. The Sonnenberg couple has been loyal clients at Bartels Academy for years. Their company Luxaflex (Hunter Douglas) sponsored Imke on Sunrise and Toots for a five year period.

The Sonnenberg family also owns KWPN stallion Googel (by Bordeaux) which they bought for 200,000 euro at the 2015 Excellent Dressage Sales.