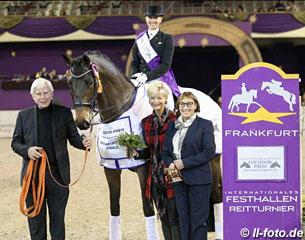 Jessica von Bredow-Werndl and the 10-year old Trakehner mare TSF Dalera BB became the winners of the 2017 Louisdor Cup Finals at the CDI Frankfurt on Sunday 17 December 2017. Twelve combinations qualified for this German Developing Grand Prix Horse Championships and Dalera BB bested the field in the Short Grand Prix with 76.720%.

TSF Dalera BB is owned by Von Bredow's long-time sponsor, Swiss former judge Beatrice Burchler-Keller, and is by Easy Game x Handryk. Von Bredow-Werndl had the dark bay mare on excellent form. The pair won the warm up round, Intermediaire II, with 77.093% and went on to win the Finals, the Short Grand Prix, with 76.720%. Judges Katrina Wust, Raphael Saleh, Evi Eisenhardt, Hans-Christian Matthiesen and Ghislain Fouarge, placed the pair first unanimously and even rewarded 10 for the piaffe-passage transitions. 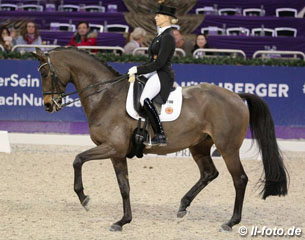 "I just love that horse. She always wants to do every right and can do it," said Von Bredow "I didn't want to stop riding." The Aubenhausen based rider was thrilled with her horse. "It's only her third indoor show, so of course she's a little bit green and inexperienced when it comes to dealing with the atmosphere, but you can't blame her for that."

Commentating judge Dietrich Plewa commented that, "Dalera has outstanding quality of movement and is certainly knocking on the door for the A-team with this performance. She lost the harmony a bit in the zig zag, but overall there were many highlights." 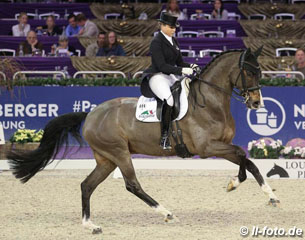 "On Friday he was still quite impressed by the arena (in the warm up test), but today he would ride full force and he gave me a super feeling," said Schneider, who was the winner of the 2016 Louisdor Cup Finals on Sammy Davis Jr.

Ingrid Klimke was the hot favourite for the title on Fait Berghuis' 9-year old Westfalian mare Geraldine (by Furst Grandios x Tolstoi) but the mare unlevel in the trot work and was excused from the test. Aboard her second ride Franziskus, a 9-year old Hanoverian stallion by Fidertanz x Alabaster, Klimke finished third. The stallion was quite distracted and whinnied in his test, but he stood out in the extensions.  "He was a bit over eager and it took a while before I had him fully with me," said Klimke afterwards. They scored 72.160% for third place. 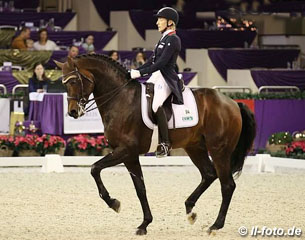 Heiner Schiergen and Hannah Erbe's 10-year old Rhinelander gelding Carlos (by Carabas x Weltmeyer) also struggled with the atmosphere. In the warm up round they pair had to retire as Carlos did not cope with the atmosphere. In the Finals the tall dark bay gelding was more settled and finished fourth with 71.080%. In the summer Carlos won the 2017 European Young Rider Championships with his owner Hannah, but in the autumn she handed the ride to her coach who took him to Grand Prix level.

Frederic Wandres and Hof Kasselmann's 10-year old Hanoverian gelding Duke of Britain (by Dimaggio x Rubinstein) completed the top five with a 70.940% earning Short Grand Prix ride. Duke of Britain is bred in the U.K. by Sarah and Tony Pidgley.