His Moment Returns to Former Ownership 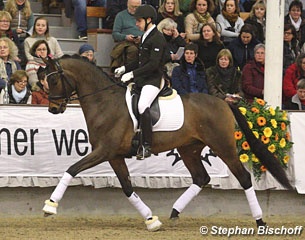 The 2016 Trakehner Licensing champion His Moment has officially returned in new ownership. A part of the original owners' group that presented the stallion at licensing have taken the stallion back after his fertility turned out to be questionable.

His Moment is bred by Christian Röhl and is by Millennium x Le Rouge x Tivano.

He was originally purchased at the foal auction in Hanover in 2014 by a consortium of 5 parties, including Röhl, Bernard Langels and Donatus von Hessen. They sold the stallion for 200,000 euro to Andreas Helgstrand at the Trakehner Stallion Licensing Auction.

Co-owner Bernhard Langels has now confirmed that the stallion has officially returned in his ownership and that the bay will be prepared for a sport career instead. In agreement with breeder Röhl, His Moment will be doing the stallion sport test in February 2018.

The new, old owners say that as soon as His Moment has completed the test, "nothing will stand in his way to return to breeding. We are looking forward to his first foal crop and we are expected three foals by him ourselves."