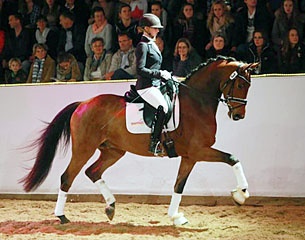 The bay show jumping bred Cosmopolitan (by Concetto x Larimar) sold for 85,000 euro to Australian Jan Smith but the gelding, who won the Baden Wurttemberger regional championships for 3-year old, will stay with Andreas Schöffner and Anna Catherine Adam in Vechta, Germany for training.

The Marbach sport horse auction also included a collection of stallions that were presented for licensing on 3 - 4 November in Marbach. The second most expensive horse at the auction was the newly licensed Arogato (by Antango x Sandro Hit), which sold for 72,000 euro to Denmark.

The approved 9-year old Spirit of Westfalia (by Sandro Hit x Donnerhall) found a new owner in Canada for 70,000 euro, while the premium licensed jumper Conrad (by Colorit) sold for 62,000 euro.