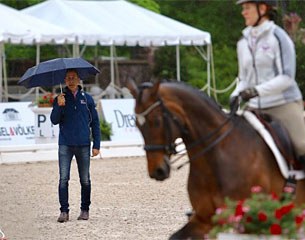 US Equestrian (USEF) has announce the dates for the eighth annual Robert Dover Horsemastership Clinic Week (RDHMW) from January 2-5, in Wellington, Fla.

Designed to identify and develop the next generation of U.S. equestrian team talent, participants will receive instruction from experts in a variety of aspects of horsemanship.

Training sessions will feature intense, mounted sessions led by internationally acclaimed American athletes and trainers and daily instruction on all facets of horsemanship from experts in their respective fields. Participants will hear lectures from veterinarians, saddle and tack specialists, farriers, dressage professionals, media staff, life coaches, and accredited judges. The week will conclude on January 5, with clinic participants riding their tests in front of the judges and gaining feedback from coaches.

18 athletes will be invited to participate in RDHMW, including:

US Equestrian appreciates the many sponsors and clinicians who make this event possible, including Kim Van Kampen of Hampton Green Farm and Equestrian Sport Productions (ESP) in conjunction with Mark and Katherine Bellisimo. US Equestrian also thanks Terri Kane and Diamante Farms for her continued support and hosting of the party for the sponsors and participants of the clinic.

Athletes interested in a wild card application should contact Hallye Griffin, US Equestrian Managing Director, Dressage, at hgriffin@usef.org. The deadline for application submission is November 15, 2018.

The public is welcome to audit all mounted sessions at a nominal $25/day charge.