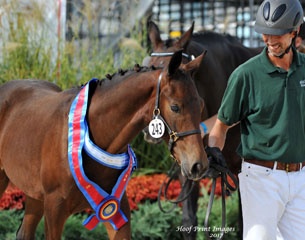 The colt foal Louisville HTF has been named champion foal at the 2017 Devon Breed Show which takes place annually three days before the Dressage at Devon CI in Pennsylvania, U.S.A.

On the first day of competition, Tuesday 26 September, the Foal and Young Horse Championship took place.

In the important Foal Championship class the Hanoverian colt Louisville HTF received the champion's sash. Presented by Michael Bragdell, this colt is by Lord Leatherdale out of Unicum-D (by Negro). He is bred and owned by Hilltop Farm.

Bragdell also presented the reserve champion foal, Sultan's Dream. Bred and owned by Anita Russell, Sultan's Dream is a Hanoverian bred colt by Sternlicht out of Day Dream (by Dream of Glory).

Earlier in the day more foal classes where held. Louisville won the colt/gelding of the year class, ahead of Sultan's Dream, while Delphenia was the winner of the Fillies of Current Year class ahead of Milana ISF. 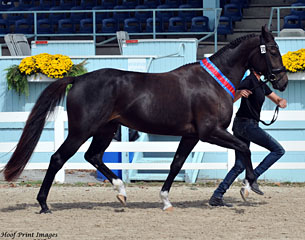 The top two of the colt and filly championship was eligible to compete in the 2017 Devon Young Horse Championship which was won by Danae MF ahead of Don Pharrell MF.