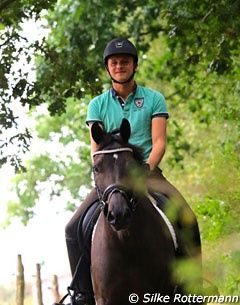 Leaving the motorway near Nantes on a grey summer, day which was forecast to be sunny, I drive onto narrow country roads that pretend to lead to nowhere. It is the moment when man's trust in the GPS is put on a test and one is immediately reminded of the old song „Lost in France“. Here in Monvallon near Blain, in the middle of French nowhere, Julien Vincent, a young man who twice represented France at the World Young Horse Championships, runs his training stable.

Vincent (AGE) has specialized in the training and presentation of young dressage horse between three and six. Within a short time the fair haired man from Brittany has made himself a name for carefully producing young talents and harvesting the fruits of this work at the end of September. Then the "Grande Semaine" in Saumur, the French pendant to the famous German „Bundeschampionate“, takes place. 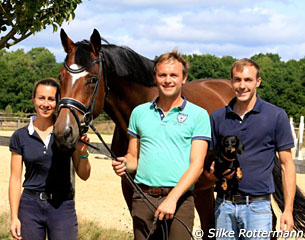 Since the beginning of the young dressage horses classes and the establishment of the annual World Championships the market for young dressage talents has grown considerably  and with it the stables that focus on these young horse classes. It is no different in France, even though the horses who are stabled at the yard of Pascal Leroy, one of the country's most renowned three-day-eventing riders, are all bred abroad. "Our French horses, well..." Vincent smiled, slightly blushing, „they are super for jumping, but for dressage...no, we have to look at Germany and Holland.“

Ten boxes are filled with clients' horses, from recently broken in 3-year-olds to an advanced 7-year-old. However, „usually the horses are sold when they are six or seven years old as it is my job to bring them on and increase their value.“ Julien isn't at odds with this, even though he is also dreaming to reach Grand Prix one day. „ While I like competitions and I do not like to lose; I also do not run after the highest level. But I love the sport, when it is beautifully done.“ 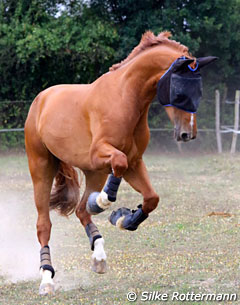 Vincent tries to give the young horses a good start in life and for that he falls back on Sebastien Jaulin, the ethologue from Haras de Hus who backs unbroken youngsters for Julien. At De Hus Julien Vincent spent interesting years under the tutelage of Jessica Michel. Coming from a non-horsey background without considerable financial assets, he left school and worked with jumping riders before a Dutch breeder, Ria Meijer, offered him a job at her stud farm in France and there "I fell in love with dressage."

Later, Haras de Hus turned out to be the ideal place for the dressage newbie to learn how to bring on young horses in a professional way. It had been intense three years there in which Julien was allowed to ride horses like Olympian Riwera de Hus, Socrates de Hus and the late Don Juan de Hus, under the supervision of Jessica Michel. He also profited from lessons with German trainer Hans-Heinrich Meyer zu Strohen who regularly came to Haras de Hus. At the famous stud farm he started the 3- and 4-year-olds. 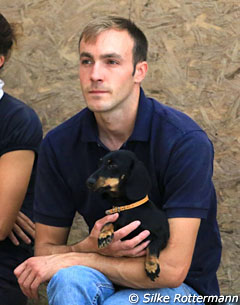 In the autumn of 2013, Vincent went independent and it was a big step for Julien, who is supported by his life partner Maxime Ruault and his groom of two years, Lolita de Flores. With his working experience he had a good basis and network to fall back upon. "The facilities here in Monvallon are very functional and give the horses the best possibilities as the training grounds are of high quality. There are wonderful hacking opportunities around and most important, all my horses can go to the field all year," said Vincent.

On that overcast late August morning Julien just returned with Girello (KWPN by Andretti x Royal Dance), the horse which twice represented France at the World Championships in Ermelo. "This year I did not ride so well in the first round. He felt good in the warm-up, but when I went into the arena I got tense and when the rider is tense, the horse cannot really be supple," Julien admitted. "But I relaxed afterwards, I had nothing to lose in the next round and." After Ermelo Vincent gave his "little black prince" a well deserved break after Ermelo and is only just back in light training. He did some quiet rounds in the outdoor arena after his hack.

While Girello, who is owned by Benedicte Guillot de Suduiraut, is part of the eldest horses in the stable, Toogood Tobetrue is one of the new kids on the block. Bought for Girello's owner in Holland, then gelded, the attractive dark brown Oldenburg Tomahawk offspring is first lunged outdoors. Julien uses running side-reins for that which are really long and only very slightly enframe the horse. 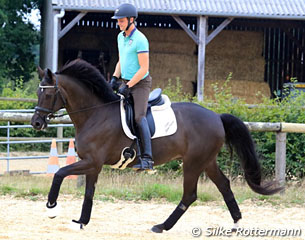 "I do not like the usual standing side-reins because all the horse can do is to shorten its neck. I prefer the running side-reins as they allow the horse to stretch and extend the neck. To learn to stretch out is particularly important for youngsters with short necks by nature," Julien elaborated while the horse gave a first glimpse of his outstandingly balanced canter.

Back in the indoor arena the Donnerhall-grandson spotted a pullover in one corner and promptly reacted with a side-jump, but Julien was glued to the saddle, never loosing the balance and immediately giving the hands to prevent pulling the mouth. With an amazing calmness and without visible pressure he asked the horse to move back to the sweater, picked it from the fence and kindly patted him while holding the sweater against the horse's lower neck. 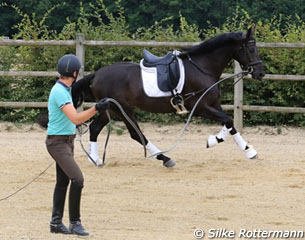 All happened without the least fuss or fight and Julien made sure the horse passed this "scary" corner first in big, then in smaller circles several times before the work began. According to his baby age, the horse was asked to trot and canter on straight lines and took an even contact. While there was no wild bucking or jumping, Julien said he does not mind if a young horse shows some exuberance as long as it remains relatively safe for all involved. "It is very important that the horses are happy in their lives. If this means that they occasionally jump in the air to show their joie de vivre, that is okay for me. They must remain fresh in body and mind, day by day," he said.

In order to fulfill this aim, training sessions vary between 20 to 35 minutes. They usually begin with a walk on long reins on the nearby trails around the fields and property. Screaming Pony Club kids, mares with foals or thundering horses in the fields nearby provide a natural and good preparation for future shows where the usual hustle-bustle often unsettles inexperienced horses. 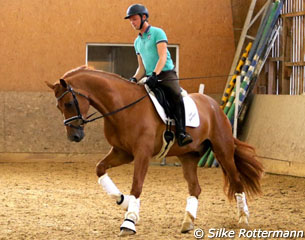 The training as such includes some lunging for the youngsters while the more experienced horses might immediately start the work under the saddle. The main aim is to make the horses supple and improve their balance and responsiveness to the rider. No matter if he is riding the huge chestnut Oldenburger gelding Zenith du Feuillard (by Zhivago x Samba Hit), who just recently came from Barbara Klinger's stable to be prepared for Saumur, or the fiery little 3-year-old mare Jazzoria with the dream pedigree Jazz x Gribaldi x Ferro, Julien's riding style is stamped by his calm attitude and his effective position that hardly ever changes, whatever the horse might have on his mind.

When the young mare becomes a bit nappy in one corner, there is no pulling and squeezing, just a firm calf at the flank and hands that give and invite her to take the foward gear again. Vincent has a good sense of humour about the temperamental redhead from Holland, who is probably  a "typical Jazz" but with a hind-leg activity to die for. "I really like to teach these young horses a good basis and play with them at work. Then they get a good start for becoming sport horses," Julien explained. 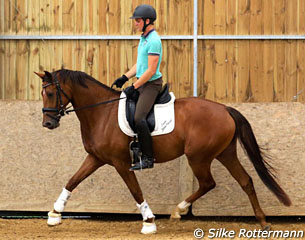 Also this year he qualified several horses for the finals in Saumur at the end of the month and preparations are on. Bringing a truck-load of talented youngsters to the Grande Semaine is routine for him, his partner Maxime and Lolita. „It is all about logistics“, Lolita smiled. At age 32, Julien has already qualified 35 horses since he made his show debut in 2010 in France's most important young horse event in Saumur at the end of the outdoor season. Seven times his horses ended on the podium, three times they were crowned French champions of their age divisions so far.

Julien Vincent might be the right man for the job with the babies and youngsters, he himself cannot completely deny the dream of one day bringing a horse to Grand Prix-level. „It is my goal before my 40th birthday," he confessed with a twinkle in his eye. "Maxime and I also breed a bit with four broodmares of best German and Dutch origins like Donnerhall, His Highness, Jazz and Ferro. Of course we have foals and sell them, but I also hope that one of our mares one day will offer me my Grand Prix horse."

Currently trained by his former mentor Jessica Michel, Julien also spent a training stint with top rider Helen Langehanenberg in Germany last year. "At Haras de Hus I learnt the classical riding and Helen's riding is the one I would like to be able to show one day," he stated.