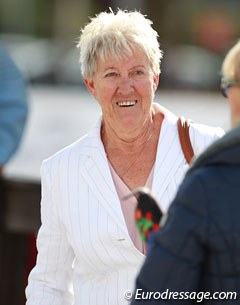 Retired American 5* dressage judge Liselotte “Lilo” Fore will be inducted into the Roemer Foundation/USDF Hall of Fame (HOF) at the Salute Gala and Annual Awards Banquet, during the USDF Annual Convention in Lexington, KY.

Induction into the HOF is an honor bestowed on individuals and horses that have made outstanding contributions to dressage in the United States.

Lilo Fore has been synonymous with dressage in the United States as a competitor, breeder, trainer, instructor, and judge for over 25 years. Originally from Germany, Lilo started as a trainer in the United States in 1972, and has developed horses and riders who have qualified for national and international championships. She now bases her breeding and training operations at her farm, Sporthorse America, in Santa Rosa, CA. Serving as an international judge since 1990, Lilo held an FEI Judge status as a 3* PARA Judge, and 5* Dressage and Young Horse Judge before her FEI retirement in 2016. She is also a USEF “S” Judge for Dressage and Young Horse, and a USEF “R” Dressage Sport Horse Breeding Judge. Her judging assignments have included CDI's 1-5* level and CDI-W shows, and she has also been a member of the ground jury for multiple USET selection trials and for the Pan American Games, World Cup Finals, World Young Horse Championships, and the 2014 World Equestrian Games.

Lilo's involvement with USDF and USEF has proven instrumental in the development and promotion of dressage education in the United States. In addition to writing countless articles on dressage, she has served as the instructor for multiple USDF events, including the 2017 Adequan®/USDF FEI-Level Trainers Conference, and continues to teach across the country. Lilo was a founding member of the USDF Instructor/Trainer Program and still serves as its co-chair, an examiner, and instructor for the program, while also acting as an advisor to the USDF L Program Committee and serving on the USEF Dressage Sport and Licensed Officials Committees.

USDF President George Williams adds, “The USDF is pleased to recognize Lilo with this honor. Her boundless energy, enthusiasm, and lifelong dedication to dressage has made her a force within the world of dressage. Lilo's impact is far reaching and involves many aspects of our sport.”