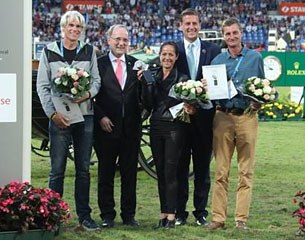 New Zealand equestrian photographer Libby Law became the recipient of the 2017 Silver Camera Award, the prize for the best equestrian sport photo of the year, handed out annually at the CHIO Aachen.

Cheering can be so nice! Even when captured on a photograph one can still feel the short moment of triumph, the second in which one knows: Mission accomplished! One has reached the top! The photographer from New Zealand, Libby Law, perfectly captured such a moment.

She convinced the jury with her entry and was delighted to win first place in this 2017 edition of the "Silver Camera" media prize for best Equestrian Sport Photo of the Year.

On Saturday evening 22 July 2017 the New Zealand photographer was presented with the coveted media award in the main stadium at the CHIO Aachen, together with the runners-up Arnd Bronkhorst (NED) and Eric Knoll (FRA), who came second and third respectively. When Law’s victory was announced by the stadium commentator, she had every reason to cheer and had to wipe away the odd tear. 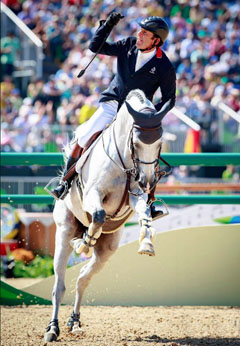 The famous media prize for the best equestrian photo of the year is jointly conferred annually by the Aachen-Laurensberger Rennverein e.V., the Sparkasse Aachen and the Rheinischer Sparkassen- & Giroverband. The winner receives prize-money to the value of 2,500 euro, second place picks up 1,000 euro and third place 500 euro.

This year the jury comprised of Christophe Bricot (last year’s winner), Rob Ehrens (national coach of the Dutch show-jumpers), Andreas Müller (Executive Director of the Zeitungsverlag Aachen), Erich Timmermanns (Director Advertising & PR, Sparkasse Aachen) and Frank Kemperman (Chairman of the ALRV). They were faced with the difficult task of selecting the best equestrian sport photo from among the 101 entries submitted by photographers from all over the world.