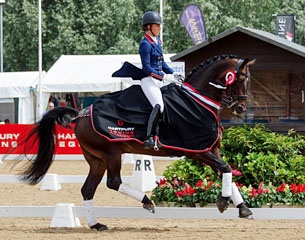 Charlotte Dujardin and Lara Butler took the spoils in the small tour, while Spencer Wilton and Richard Davison earned highest honour in the bif tour at the 2017 Hartpury Dressage Festival CDI which took place in Great Britain on 7 - 9 July 2017.

After the Prix St Georges, Charlotte commented that, "I was really, super-happy until the flying changes, when we made a couple of mistakes. I came out really disappointed with myself, and Carl [Hester] was watching, so it was extra pressure! But the quality of the horse’s work is amazing and we were able to get a high mark still. He’s still green and this is all experience. He’s quite a character but has a lovely, workable temperament.” 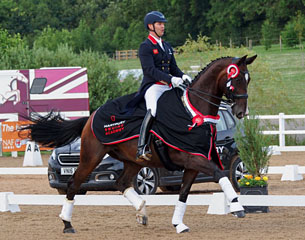 "Friday Kristjan did a super consistent test just one little confusion coming out of the pirouette. He thought we were doing a full one. He came 6th in the Prix St Georges," said Butler (née Griffith). "Kristjan and I upped our game for the Inter 1. He was amazing, the best test I have ever done on him to come second on 73%!" After winning the Kur, Butler said, "Oh my goodness what a day I can't actually believe it! A win in Kristjan's first ever CDI and a personal best of 78% in the inter 1 freestyle."

At big tour level, Spencer Wilton and Jane Sewell's Hanoverian gelding Super Nova (by De Niro) scored unprecedented personal best marks. In the Grand Prix Olympian Spencer Wilton stormed away with a win on 78.820%. Gareth Hughes came in second on Anne Keen's Don Carissimo with 73.380%, while Richard Davison and Bubblingh were third with 73.160%.

Wilton also kept his cool to clinch the top spot in the Grand Prix Special with Super Nova II on 77.020%. Lara Butler and Rubin Al Asad were less than one percent behind on 76.196% to take second whilst Gillian Davison and Alfranco completed the top three on 71.745%. 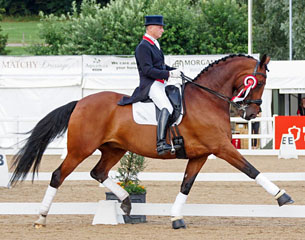 In a hotly contested Grand Prix freestyle on Saturday night Davison took the honours aboard the home bred bay gelding Bubblingh (by Lingh). The British pair lit up the Hartpury Arena with a technical floorplan and toe-tapping music. It included an instantly recognisable excerpt from Prokofiev’s Romeo and Juliet and earned them a total score of 76.775%. Just 0.125% behind, in second place, was Davison’s fellow British rider Gareth Hughes riding Anne Keen’s gelding Don Carissimo. An accomplished test from Canadian Diane Creech put her into third place with Chrevis Christo, only a few marks behind on 75.150%.