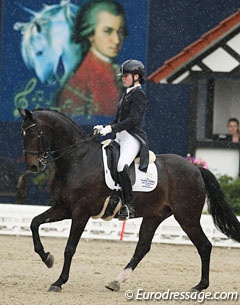 Chief Selector Andrea Smith commented; “We want to thank all the riders for showing such commitment to the squads. We appreciate how hard it is to juggle competing internationally with studies, exams and training. The Young Riders have been strong this season and competition for places was tough, while the Juniors are in a transitional year but the progress shown through the season has impressed. A huge thank you to our hosts this weekend for the camp, Sarah and Tony Pidgley from Kilbees Farm. Their kind hospitality and fabulous facilities are very much appreciated."

Great Britain will not be fielding a team in the children's division, but is sending one individual rider: Lily Payne (13) from Leverton, Lincolnshire with Anne Savage’s Beckhouse Cancara.

The first reserve is Robyn Smith (21) on Gail Smith’s Foold Uz (10yrs, by Fulton); the second reserve is Lauren Phillips (21) with her own Hot Chocolate (9yrs,  by Hohenstein)