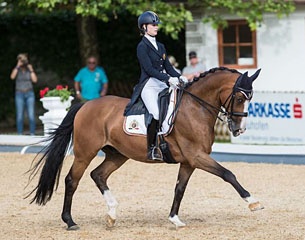 Belgian young rider Antonia Arl reigned supreme at the 2107 CDI Achleiten on 9 - 11 June 2017 and won three out of four classes she was entered in. Although Arl showed great ability to perform and win under pressure, the rider and her family have decided to withdraw from Belgian team contention for the 2017 European Junior/Young Riders Championships.

After a victorious campaign at two CDI's in Wellington, Florida, in February and March the 16-year old Belgian based Arl returned to Europe to continue her spring show season with solid top 10 placings at the CDIO Saumur in April. Arl's next stop on her international tour was the perfectly organized CDI at Sissy Max-Theurer's beautiful castle Achleiten in Rohr, Austria, last weekend.

Belgium was represented by two riders at the 2017 CDI Achleiten. Former Belgian team rider Numa Verberne made his CDI debut aboard Equestricons Bolita (by Uptown) and placed third in the Young Riders' team test (69.167%) and second in the individual test (70.702%).

Antonia's four consistent scores above 70% alongside her further achievements this season make her a hot candidate for Belgian team selection for the 2017 European Junior and Young Riders Championships in Roosendaal this summer, but the family has decided to withdraw from team contention. 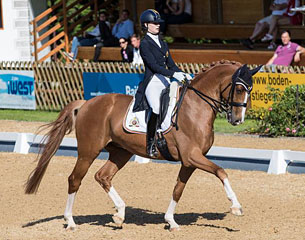 The Belgian Equestrian Federation is known for making poor decisions when it comes to scheduling the show calendar each year; adapting the date to the private schedule of one or two riders and always arranging the Belgian Championships at the most unfortunate timing . The event usually overlaps, precedes or succeeds a major (inter)continental Championship and it is no different this year. The 2017 Belgian Championships have been scheduled during the 2017 European Pony Championships and also ten days before the 2017 European Junior/Young Riders Championships. The Nationals ask much power, energy and effort from the horses who should be at peak performance level for the Europeans right afterwards; an impossible feat that shows the federation's carelessness towards the wellbeing of the horses.

"The juniors and young riders will have to ride three tests at the Belgian Championships and only ten days later the European Championships begin," said a disappointed Jochen Arl, who has invested much time and money into his daughter's dressage career just like all other parents of the youth riders in Belgium. "For the Grand Prix riders, who have their Europeans a month later, they already reduced the Championship rounds to two tests, but the youth riders still have to do three. This is totally against the welfare of the horse and in my opinion a very poor preparation for the Europeans." 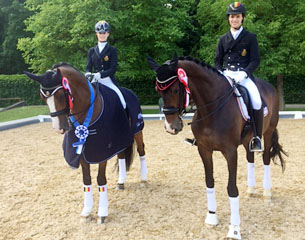 Jochen Arl's disgruntlement with the policies of the Belgian Equestrian Federation began back in February, when the dressage committee decided to change the squad criteria once again. "The A-squad criteria for youth riders were lifted to three times 69%, which meant that Belgium had just one rider in the A-squad at the beginning of the year in all three divisions, ponies, juniors and young riders together. None of the others were able to meet such high standard," he explained. "By setting the bar so high, the dressage committee discourages them psychologically. The riders and their supporting parents have to follow the whims of the federation, which often operates with double standards for some of them . This leads to many kids feeling unfairly treated despite doing their best."

As it would be too demanding for horses to do two Championships back to back, Antonia and her father have decided to by-pass the European Championships and opt for the Belgian Championships, where Antonia will be amongst the favourites for the title. Verberne and Equestricons Bolita will not be available for European team selection as the horse is for sale and Numa will take up his job as a professional rider at Henri Ruoste's yard in Germany as of 1 July 2017.